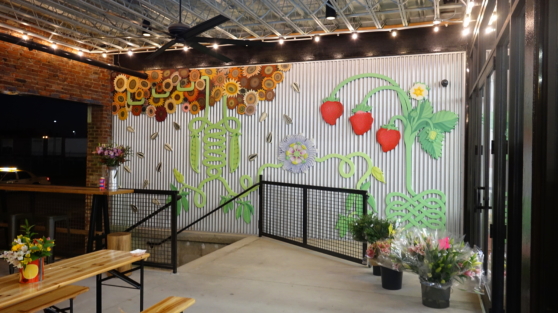 Emily C. Thomas creates art at the intersection of painting, sculpture, performance, film and installation. Her work has been characterized as eco-feminist. Taking cues from animistic philosophies, she engages with issues of body politics and planetary consciousness. Applying techniques from experimental therapies such as self-hypnosis and psychodrama, in her films and performances Thomas assumes transpersonal identities of an enigmatic, feminine persuasion: a Private Eye, Bride of the Ocean, and Abbess of the Galactic Center. In the worlds she constructs, domestic and mundane particulars become prima materia for re-enacting cosmogenesis. Washing machines are akin to interstellar wormholes, breaking wind generates aetheric ectoplasm, and primordial soup is stewing in the kitchen.

These photos document the making and installation of Emily's recent mural, situated on the porch wall of the newly opened South Point Grocery in the South Main Arts District of downtown Memphis.

This project was facilitated through the UrbanArt Commission and South Point Grocery, with special thanks to the James Family, Brett Hanover, Wendy Young, Will McGown and Silvan Laan.

* images courtesy of the artist