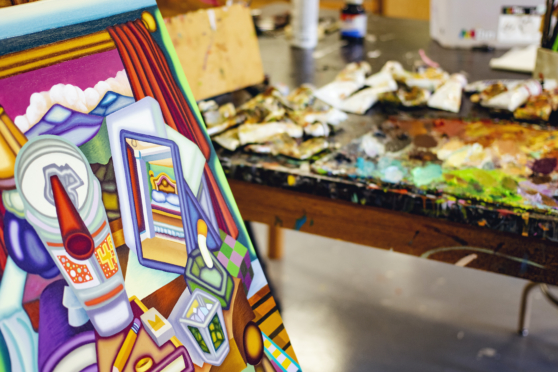 “Sequestration Still-Lifes and Other Scenes from the Plaza consists of a body of metaphorical paintings that tackle the still life as a subject. The paintings, done under quarantine, cover the ideas of domestic claustrophobia, vice, and the political and medical misgivings of our country from the months of February to August 2020. These paintings draw from a span of historical influences, which include Dutch memento mori, synthetic cubism, and pop art.”

“The work covers a seemingly repetitive narrative of an orange unraveling accompanied with other objects that represent both the life of the artist during the lockdown, the creature comforts of vice, and their parallel existence to the national narrative in the United States. Playing off of the inherent symbolism of objects familiar in Vanitas still life work, the work uses objects and places that are both personal to the artist in consumption and existence accompanied with objects that represent ideas of an expanded larger political narrative. Ultimately the work engages in the notion of temporality.”

Jason Stout currently serves as Professor of Art at the University of Tennessee at Martin and is represented by REM gallery in San Antonio, Texas and Circuitous Succession gallery in Memphis. He was named TAEA Higher Education Art Educator of the Year for 2015-16 and Best of Show at Art of the South 2016. Stout was also the recent recipient of the 2017-2018 Ray and Wilma Smith Award for creative research and the 2019 UTAA Outstanding Teacher Award. His work will be featured in this year’s New American Paintings South Edition 2020.