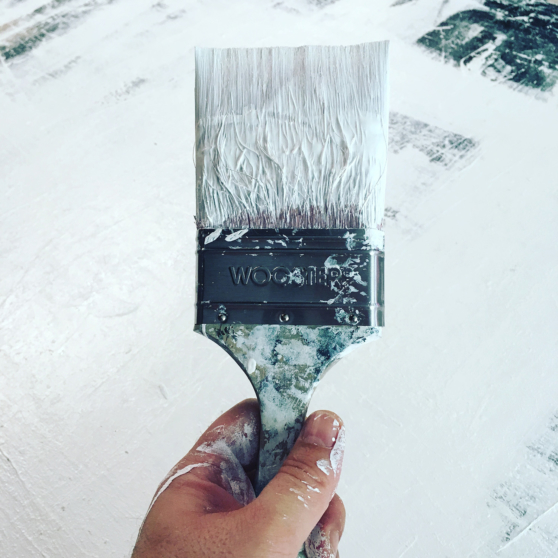 Ashley Layendecker: How long have you been making this type of work and why?

Dwayne Butcher: I used to spend so much time thinking about color; the right color. I would think about the color and the color matching the phrase. Then some people didn't like the color but liked the phrase. When we moved to Baltimore, I was working on a show and we moved across the street from the Baltimore Museum of Art, the BMA. They had a Christopher Wool piece which was this huge massive text piece on aluminum and I saw that thing for months and months and months. It was just black letters on a white background and I really liked the way that looked. So, I made a painting with a black background with white letters. I just reversed what he was doing. I was trying to experiment with everything that goes into the work.

AL: What do you think drew you to that piece? Was it the simplicity? Or the words?

DB: No, it wasn't the words. It really was just the black and white and the text. It was also how he dealt with it. It was something I was struggling with because I was hand writing everything up to that point and I was really struggling on the scalability of my handwriting. I could get it pretty large but again I could only get so big and I could only get so small. Seeing the scale of Wool’s piece opened things up for me so I just started cutting letters out of tape and using that reverse process to make the work.

AL: The paintings have the same pallet of black and white. What does this do for the work and how did you decide upon this pallet?

DB: For years when I was working with color. I was making these abstract expressionist color field paintings and I would title the work based off the color. If it was more confection-like or dessert-like, they would have tiles responding to that. If I saw a certain phrase I really liked in a food review or something like that, then I would create those colors on a painting in response. I started to care more about the titles instead of the paintings. I just started putting the text into the pieces, but I was still dealing with a lot of different colors. Unless I was making political work, or work about gender/class where pink and blues were important, color just became more of an afterthought. I started to think too much about color, so I just got rid of it. The black and white helped in doing that. With the black and white, I could just focus on the text and the phrase. I hoped the viewer could just focus on the phrase and what it means without the connotation of what the color implies.

AL: So, going back to when you would title based off of a word you found in a review, you would make a color field painting out of that?

DB: Yeah, so the first one was for a cupcake shop. The phrase that the writer wrote was ‘a moist and tasty affair’. I just liked those words. I made a light brown and light pink painting and titled it that. I would also pick out words or just use the adjectives or something like that. I then got into movie quotes and book quotes. That was probably 2008.

DB: I made a series of Memphis-based phrases that were a part of a grouping. There are zip codes, one of them is where I live in. But phrases… I just write them down. I wanted to say a few things about Memphis in that series. I worked through those and did some research about Memphis. I would read something in the news and would jot those down in my sketchbook and use those phrases in the work. I also started creating a different type of imagery in this work. That was the first time I was painting stuff that wasn't only text or color field paintings. I had some tape scraps and I started to see this shape that reminded me of a sputnik. Then I started thinking of the sputnik down the street at Joe's Liquor Store. I thought ‘hell, why not create imagery like that’. Then I did the Memphis bridge and the Pyramid and it opened up endless possibilities of what I wanted to make.

AL: Sometimes the phrases seem personal and sometimes they seem descriptive of other things. Maybe they are from your childhood or something of that nature?

DB: Yeah, I don't edit anything I say. They are all pretty personal and biographical, especially my videos. Also, I'm just responding to things that happen in the world or I just make these generic type phrases. With the groupings, they are like this non-linear stream of conciseness the way they are put together. I don't consider the composition really. I just make them and see what happens. It’s whatever I want to make and then I put them together.

AL: Can you talk more on the groupings and how they fit together?

DB: It’s almost like a game of Tetris. If I try to make a grouping or plan it out before hand, it just won’t work. I think it would look staged or forced. I see each as individuals and then I see how it comes together later. The way this started is when we moved from Baltimore to Memphis a year ago. My studio was small. I knew that I had the show coming up at David Lusk Gallery where I could put ten to twelve paintings on the wall. They were smaller, like 20” x 20” or 30” x 30” or something like that. I had the paintings out in the hallway of my apartment because my studio was so small. When David came by, he said, ‘man, what else can you do? You have time, let’s make some more’. So, I made thirty more. I brought them to the gallery and I had ten times as much as needed. So, we actually showed them all in a grouping, almost like salon style.

AL: What type of experience do you want the viewer to have with the work?

DB: We have a short attention span in today’s time. I want to make work with short little cocky statements on these canvases. I want to take the imagery down to the simplest form. People will look at these for five to ten seconds and then move on. When you have them in a grouping, you can gloss over them and hopefully spend time with some that resonate with you. It’s almost like a weird Twitter or Instagram feed. It’s up to the viewer’s interpretation.

AL: Can you describe why you make these phrase paintings with acrylic on canvas instead of screen printing or something of that nature?

DB: Screen printing is an obvious choice, but it’s all about the process for me. I like cutting up the letters and putting them on the canvas. I like preparing the surface with multiple coats of gesso and sanding the coats down. I enjoy that process.

AL: Sometimes you paint maps, can you talk about how those fit into your practice? Do you see them as illustrations of your other text-based paintings or are they simply just describing an area?

DB: They are about a specific area or a specific zip code. In Memphis, the boundaries are all class-based or race-based so when making the maps it highlights the separation. Some neighborhoods are poor, while others are wealthy. There is also this weird gentrification thing going on where these maps change. We all share and occupy the same space, so I like making maps associated with those things. Plus, I just like the way the maps look. It’s not too different from the text.

AL: On your website you describe yourself as a cultural producer. What does that mean to you?

DB: I started a blog when blogs were early. From that, I started writing for other publications around the county. I got to be an editor at a magazine. It opened up ways for me to curate exhibitions. I also got to teach. Memphis is a small town, relatively, so I've always been aggressive to create different type of opportunities, not only for me, but for other people. Viewing all those things together, you see culture. So, essentially, I became a cultural producer. The woman that came up with this term is named Sharon Louden. She describes herself as a cultural producer because of all the things she does in the arts. I like the way that sounded because I do some of those same things.

Dwayne Butcher is a cultural producer living in Memphis, TN. He recently made his return home after a three-year hiatus in Baltimore, MD. Initially, Butcher was none too excited about returning to Memphis. But let’s face it, for Dwayne, Memphis is Home.

He has exhibited work in Paris, Helsinki, Milan, Amsterdam, Washington D.C., New York City, Los Angeles, Chonqing, China, and numerous others. He has been featured in articles focusing on his work and community art projects for the New York Times, The Washington Post, Hyperallergic, Art21, and Big, Red and Shiny.

He curated 100 exhibitions at the P&H Center for the Arts in Memphis, TN as well as numerous exhibitions at the University of Memphis and Marshall Arts, and the Cheekwood Museum in Nashville, TN. He is the former editor of Number: Inc and contributes articles for a variety of local, regional, and national publications.

He is one of the world’s greatest Risk players and has won awards for his chicken wings. Dwayne spends a lot of time with his wife taking pictures of their worthless cat.

Ashley Layendecker is a painter and an independent curator working in Nashville, Tennessee. She received her BFA in Studio Art, 2D concentration in 2016 and her MS in Teacher Education in 2017 from the University of Tennessee. Ashley works as the Assistant to the Director at Fluorescent Gallery (Knoxville, TN) and for Locate Arts (Nashville, TN) where she is a contributor to The Focus.