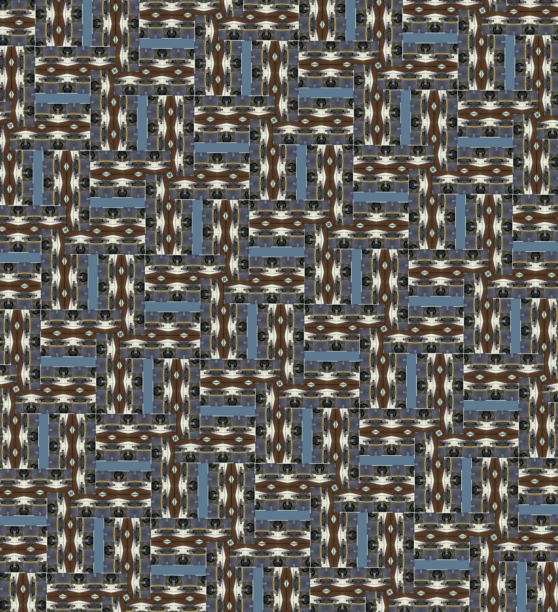 McLean Fahnestock: I wanted to talk to you because I am really interested in your work. I work a lot with appropriated images and I was struck by the surveillance images that you have been using for a long time now, in the different photographic processes, and how that has evolved over the past 15 years. You began manipulating images of airplanes in C-prints to now you are creating digitally manipulated patterns -- I don’t know if you call them collages or if you call them constructions -- by taking surveillance images and create patterns that reference rugs. Can you take us on a tour of your use of this imagery?

Paul Lee: For a long time, I have used appropriated images that are all sort of iconic. Like airplanes or horses. I started using found images of horses back in the early 1990s partly as a statement about how it is easy to go find an image you want instead of making your own image. A statement about appropriation. Now it has turned in to something else altogether because I am using surveillance images. Because as a photographer I have been thinking about the process of creating the work.

So often as a photographer by the time you are in your studio the work is pretty much done and you are just printing. But with the new work, the rugs, it is a whole new way of working. When I go to the studio I don’t even know what with final product is going to look like. I do a lot of digital collage. I play with the images and move the layers around and make test patterns. I put them away for a while and then bring them back out a few weeks later to look at them again and I keep changing them. And so, it really is getting in to working with the materials in a very virtual and digital way. But yet it is trying to get the materiality and the idea of accidents. 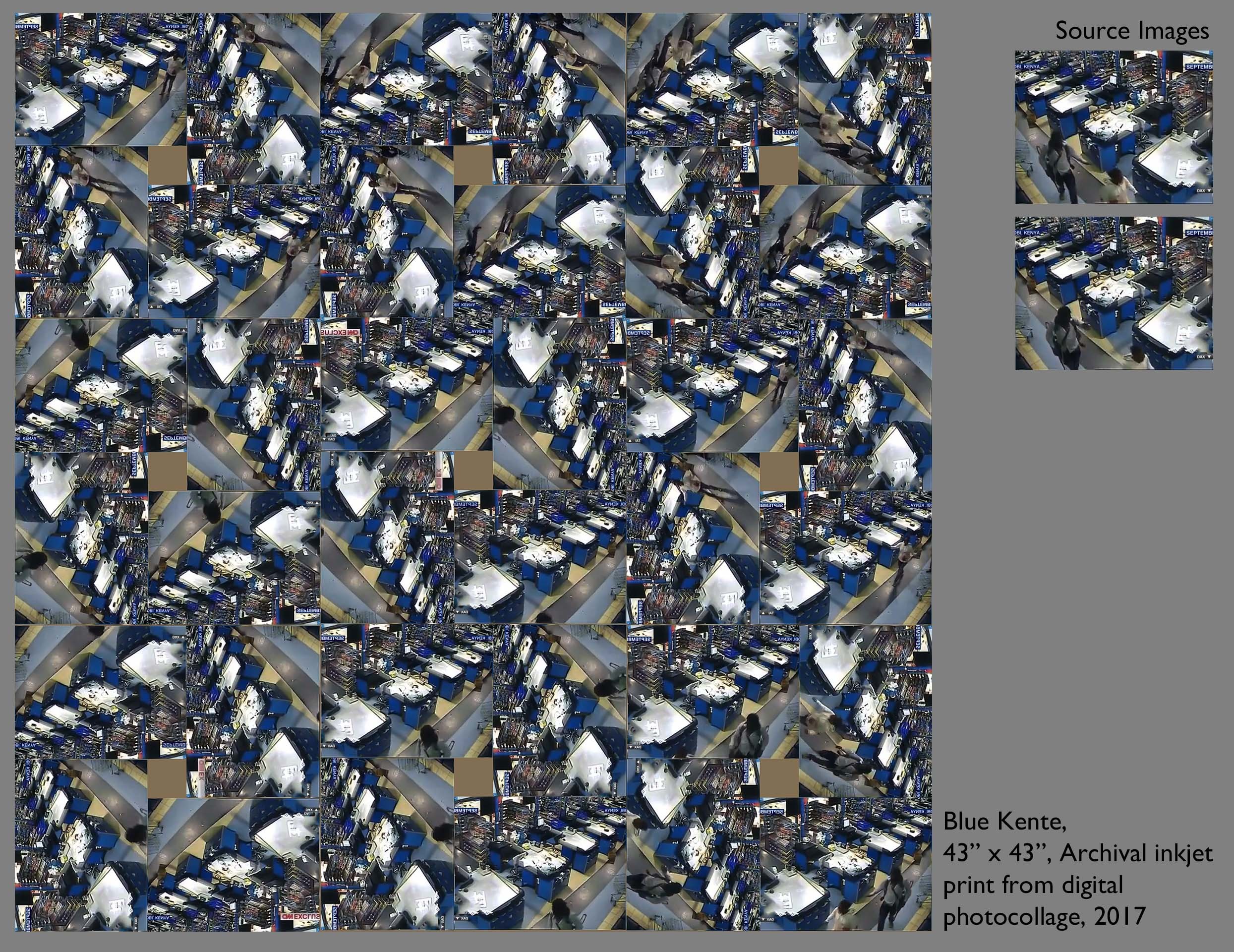 I am very envious. I am surrounded by painters. My wife is a painter. My daughter is a painter. And when they talk about the materials reacting to you or speaking to you for a long time I had no idea what they really meant. It is so rigid in photography. You get so used to doing things a certain way because it works. Now I am venturing in to this new way of working where I am playing with the materials until I find something I like and then I manipulate the images and move them around.

The rugs are now getting much more complex. It used to be about matching symmetry and you flipped them and I got tired of that very quickly. The newest ones have become more complex in terms of pattern. Secondary and tertiary patterns emerge as you start looking at them. The images have too. A colleague of mine on the west coast has called them perhaps triggering images, they are more loaded. You do see someone being shot in one. 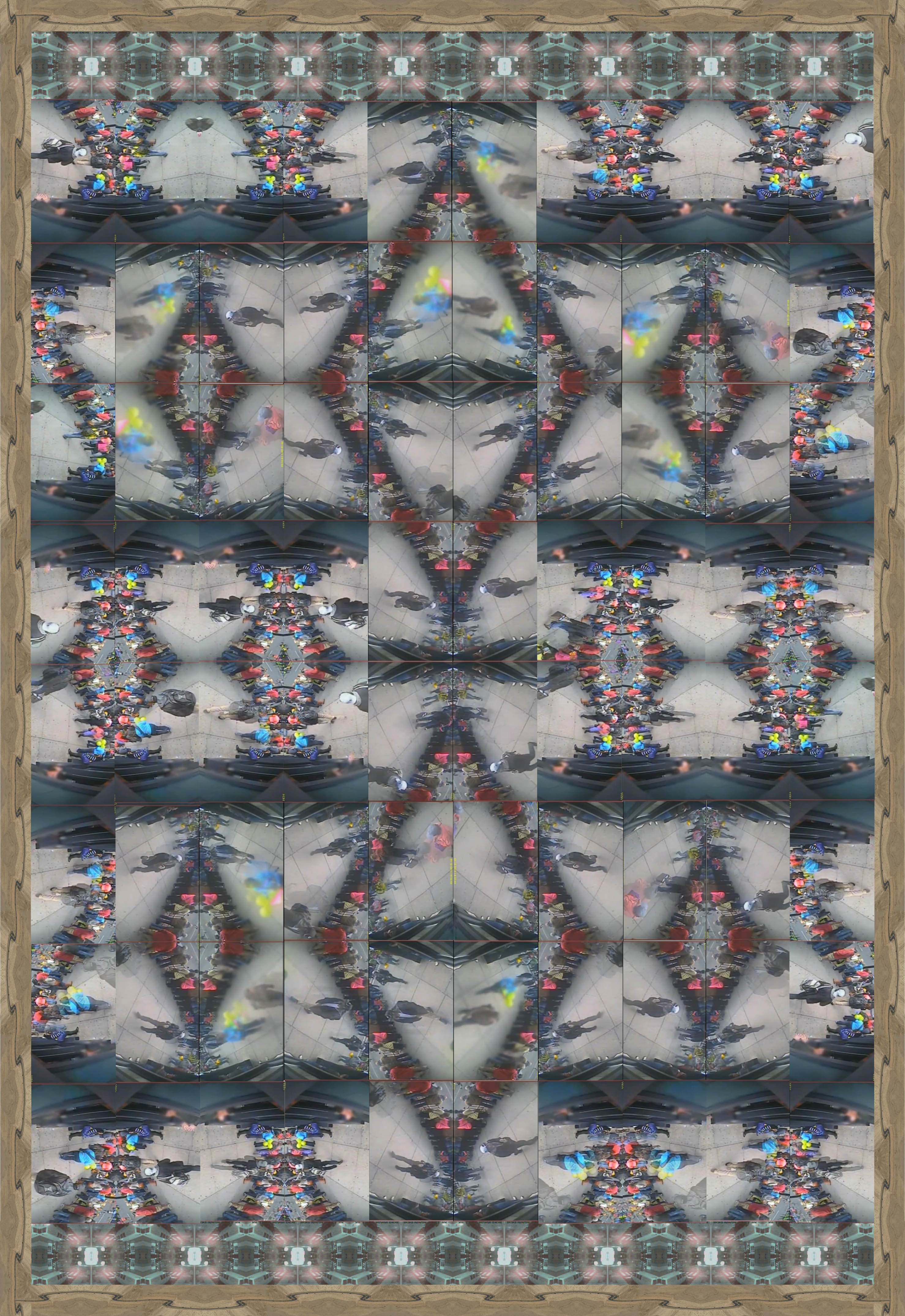 MF: Is it because where you are pulling the images from?

PL: Yea, the irony is that it is a video that has been around for quite a while. It is a shooting from Nairobi Kenya that took place at a Westgate Mall. You can see the CNN logo on there. But you do see the images of people getting shot and there is blood. The idea of the process, of the work, also has to do with really looking at something carefully and looking at to reveal certain things.

It mimics the process of who these videos are being used. Let’s say that something has happened and they want to find out exactly what occurred. They would look through these videos frame by frame. Here is the guy. Here is the car. Here is the license plate. I think that the process of looking is very precious, as an artist. So often you hear of people not spending much time engaged in it. I want to cultivate it.

I work with patterns to make a comment also on how these patterns are things you see every day on blankets or rugs and that we simply accept them and walk by them. They are a decorative element in our environment. Many of these patterns hold meanings. Plaids and tartans have connections to family identity for example. Rugs we see coming from Afghanistan woven with images of tanks that date from the 1980’s Afghan war with Russia. Patterns can tell stories and I have been inspired by this. Something that has meaning but can be ignored on a day to day basis and can be uncovered by a closer investigation.

When I show these works, I love when someone walks up to them and they initially think they are just looking at a rug but as they start to decipher the image there is this moment when they start to understand what is behind the images. 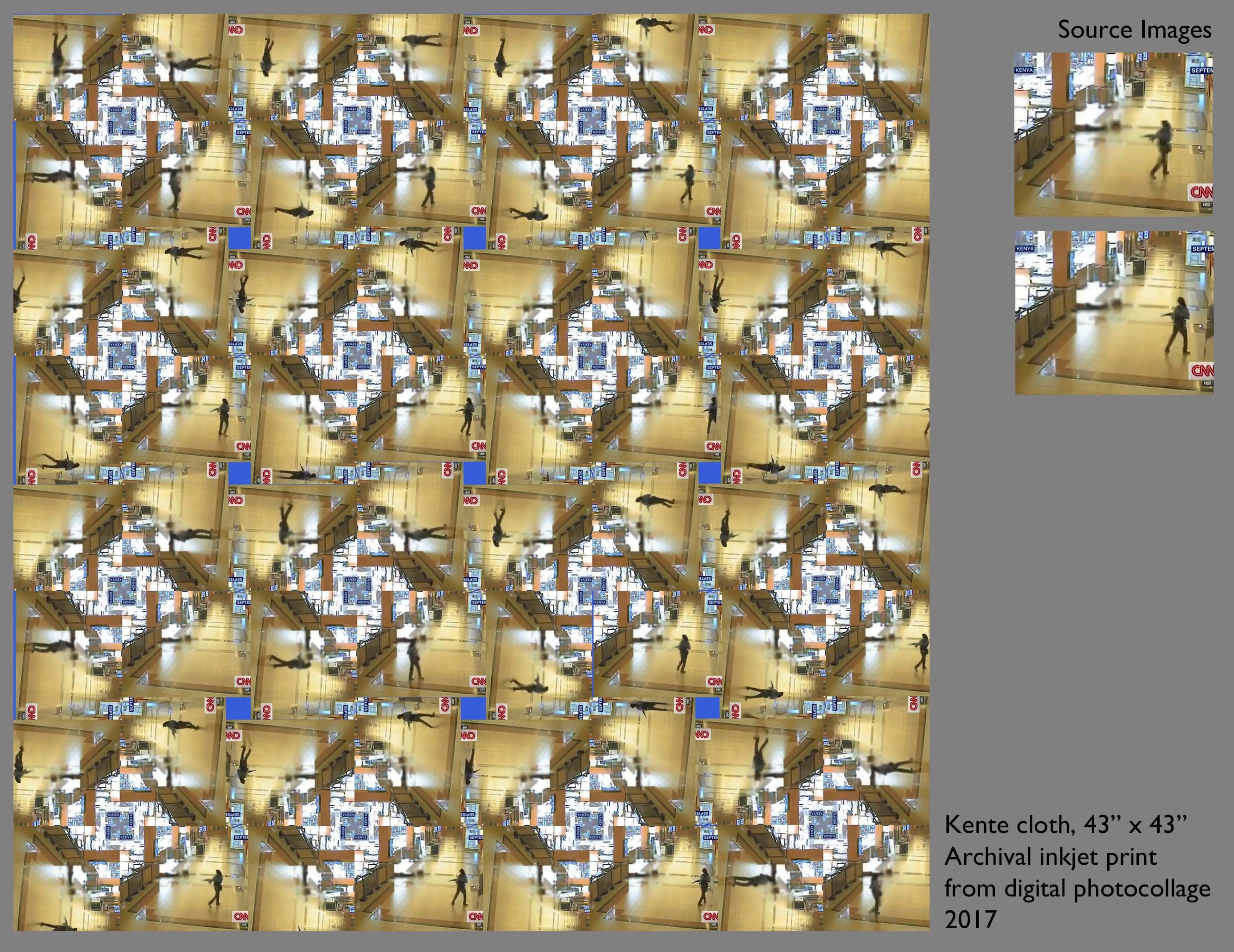 MF: The images that you are using are coming from a region where surveillance has been hand in hand with war over the past decades. Surveillance is now becoming more and more a part of our daily lives here in the United States.

PL: Part of the idea is that surveillance cameras have become so ubiquitous that we have started to ignore them. We are totally willing to give up civil liberty and privacy because they are making us feel safe. Entering an airport, we are going through all sorts of stuff, inconvenience and intrusion, because it is going to make us safe. I think that a lot of the work is commenting on this low-level intrusion in to our civil liberties and privacy. It is not unlike the patterns in wallpaper or a rug that some designer or artisan spent a lot of time designing but you just kind of walk by. There is that irony included in the work.

I am still working with how to present them. I have shown them on a low platform so that you can see the images that are flipped at different angles. They work differently if they are framed behind glass and hung on the wall. They are not fabric. I am titling them “design for” because they are not on cloth or woven. 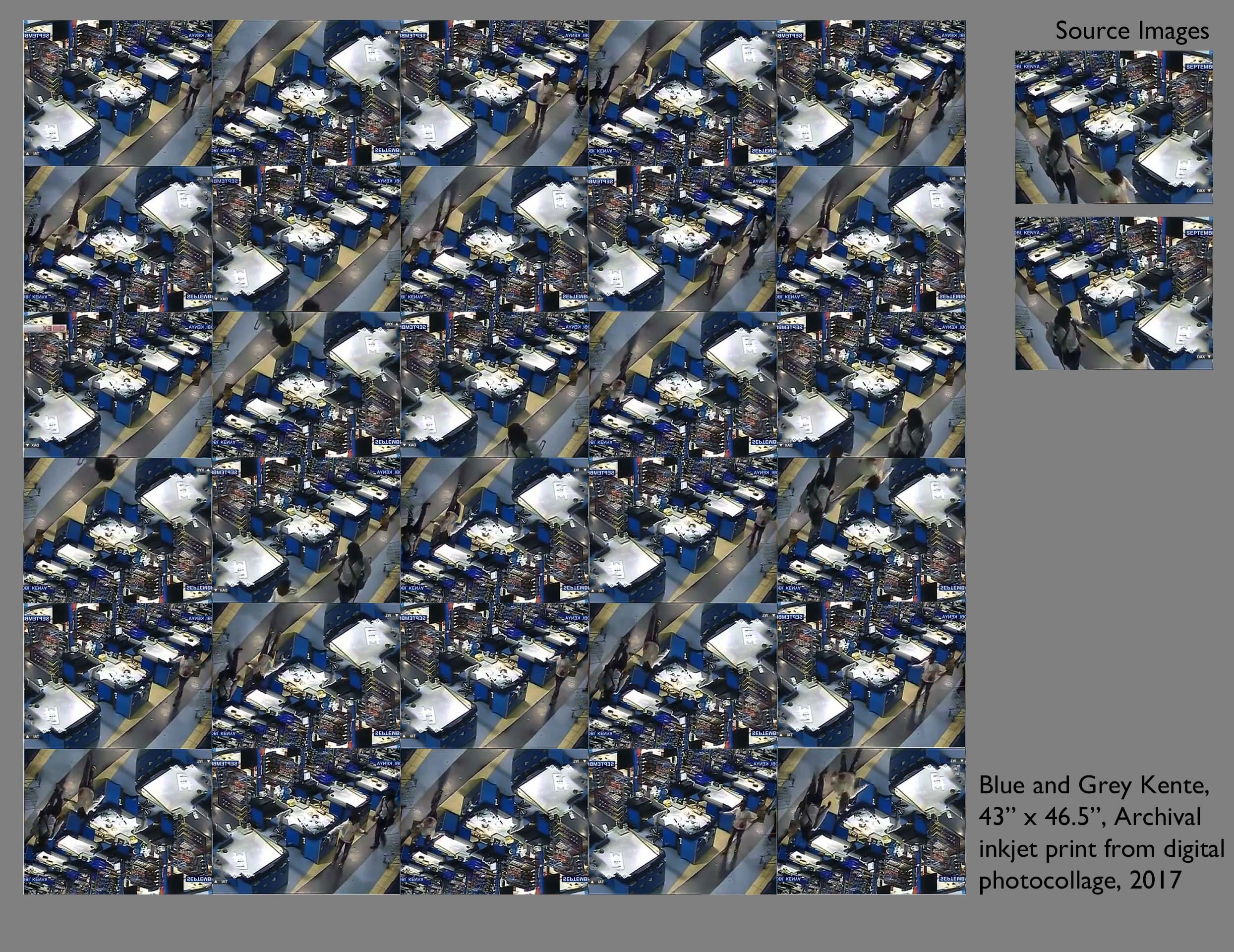 MF: What are you working on now?

PL: The new works are based on Kente cloth from Ghana. Many are block printed. I am considering printing these on cloth. So far, I have been using large format printers and printing on paper. I like thinking about switching to cloth so that it really talks about an everyday object.

There is a perversity in using these images that are quite hard to look at. On TV there would be a warning “some viewers might find these images disturbing.’ I don’t quite know how to navigate that disclosure. I want the viewers to be shocked as they discover what they are looking at. I am still really trying to figure a lot of that out. 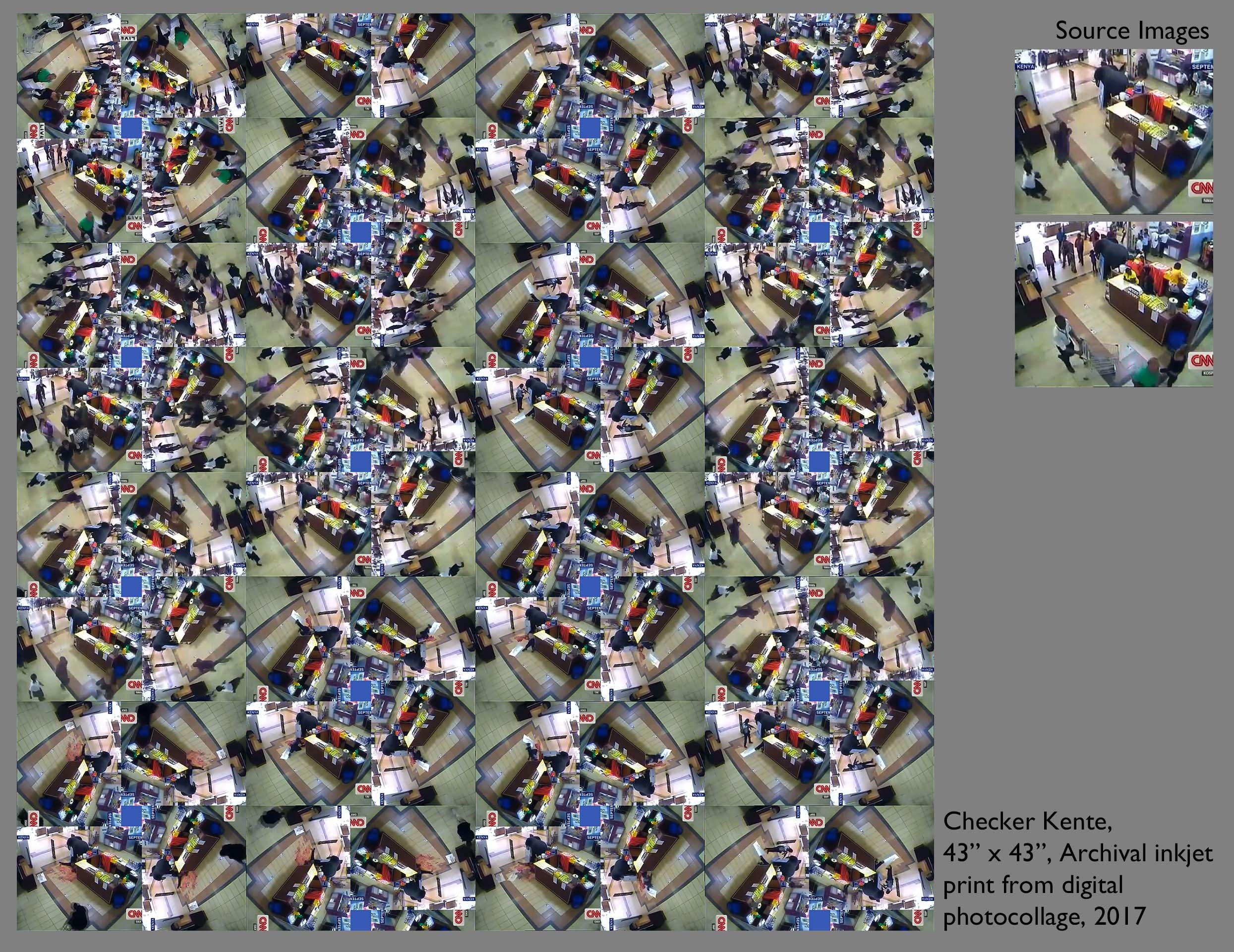 MF: Having that element of discovery is one of the great things about using appropriation in your work. In using images that have life and weight, even banality, you are able to bring in content and pit things up against other things in ways that can develop secondary narratives. That is why I truly enjoy the way that you put things together and are creating these loops – like information loops. Things don’t get resolved. I find that intriguing.

PL: I think that one of the strategies here is that the patterns can at once be intriguing and decorative. In the case of the pinwheel quilt that came from the shooting in Charleston I am referencing the craft done by the women in church groups. On the other hand, the pattern is subversive. You can also see a swastika emerging. There is a sweetness in a quilt but underneath there is a horrible image. I am not sure how viewers respond to that. I want viewers to decipher the image. 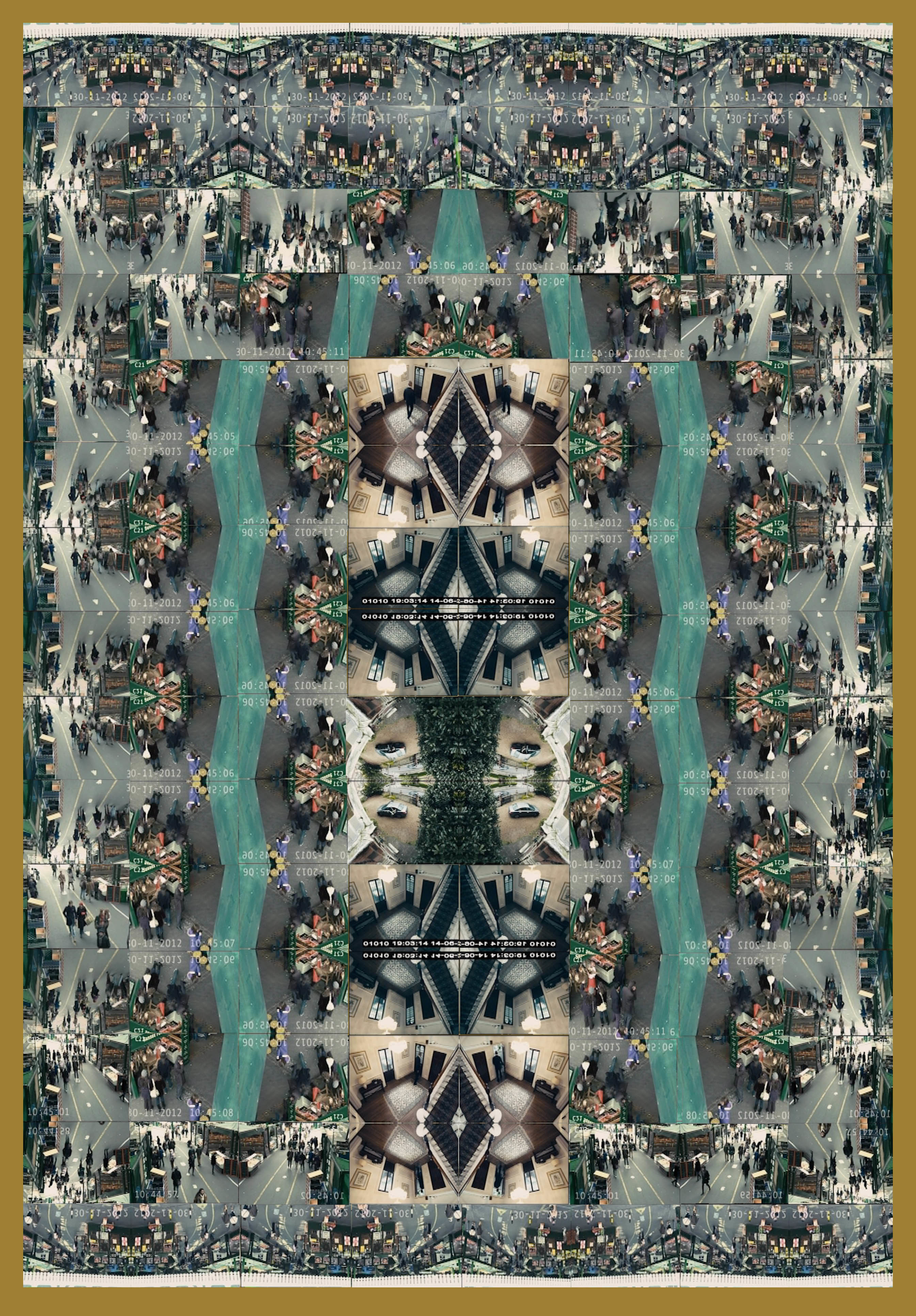 MF: I think that you work is very timely in that we are currently dealing with these matters, surveillance, the violence that is captured, and how that is presented or portrayed.

PL: Thanks for talking to me about my work. It is like having a studio visit without being in the studio.

Paul Lee’s video and photography has been exhibited in New York, Los Angeles, Chicago, Denver, Seattle, Philadelphia, Cleveland, Detroit, San Antonio and Vladivostok, Russia. His work is included in numerous private and public collections. He was the recipient of many grants and awards, including a Senior Research Fellowship to China from the National Endowment for the Humanities and two Rockefeller Foundation Travel Grants. He also received artist residencies from the New York State Council on the Arts and the Brandywine Workshop in Philadelphia, Pennsylvania. Paul Lee teaches at the University of Tennessee, Knoxville. He received his Master of Fine Art degree from Cranbrook Academy of Art in Bloomfield Hills, Michigan, an A.B. from Hamilton College, New York. In addition, he is a graduate of United World College of the Atlantic, earning an International Baccalaureate. Lee has over twenty five years of teaching experience at the university level. He has also lectured on his work at many institutions of higher education in the US, Hong Kong, Macau and China.

McLean Fahnestock is an artist and Assistant Professor of Foundations at Austin Peay State University.