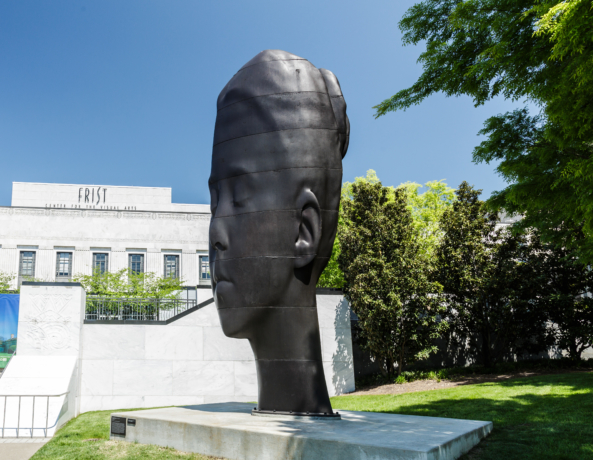 Jaume Plensa’s figurative and text-based works explore spirituality, beauty, and
the relationship between humanity and nature. Evincing an aura of serenity, his
sculptures evoke classical statuary, which represents the ideal body as a symbol
of passage from the physical into the spiritual. For example, the closed eyes of
Isabella (2014) suggest that she is sleeping or dreaming, but her head is upright,
giving her the appearance of hovering between consciousness and detachment
from the world.

Many of Plensa’s figures are distorted, fragmented, or otherwise indicative of human
imperfection. When Isabella is seen frontally, the head is proportioned in
accordance with traditional ideals of youthful beauty. But, viewed from the side,
we see that the head has been distorted, flattened into angularity. In designing the
sculpture, Plensa digitally altered the source image, emphasizing the malleability
of the human form (in contrast to the classical notion of ideal anatomy as a fixed
expression of human perfection) while calling attention to the work’s status as an
artifact of the computer age.

Isabella is included in "Jaume Plensa: Human Landscape," jointly organized by
the Frist Center for the Visual Arts (June 5–September 7, 2015) and Cheekwood
Botanical Garden & Museum of Art (May 22–November 1, 2015).