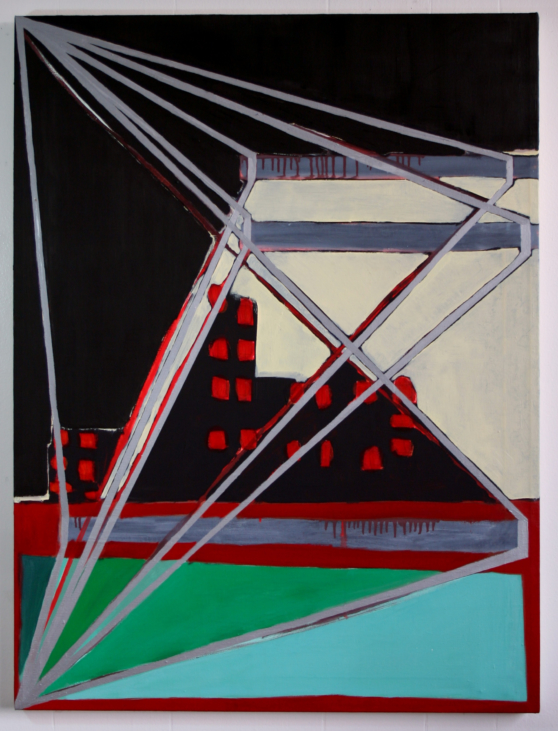 Rachel Bubis: Your work combines text into a visual language. Can you talk more about your process in translating text/words to color, line and paint? Do you find a passage or a line and directly work from there? Can you give an example? Also, are these expressed in the titles of the work? For example: She wove during the day the sadness.

Michael Giles: The process begins with the overall text on a page. As I read a book, I will often start to notice the empty spaces between the word, between the lines, and between the paragraphs. These will often stand out to me as a pattern of sorts, and this pattern I then transcribe onto a paper or canvas. In a way I can ignore the text of the book, and just find pattern in the printed letterforms.

From these patterned marks I then can begin painting. It serves as a scaffold of sorts for me to explore the act of painting. Ultimately, I want to enjoy the act of making an artwork, and the patterns I gain from the text, give me the freedom to ignore the “what do I paint” part of creativity, and can jump straight to playing with color, line, textures, etc. The text, however, is very important when it comes to titling the pieces. The titles are often combinations of words I find on the pages from which each painting is derived. I often find a combo of words that I find interesting (i.e. "She wove during the day the sadness") though I have occasionally used full sentences from the pages.

I sometimes feel that the titles are the best part of the works. But then again, they would be as they are written by a Nobel laureate.

RB: You explain that your paintings began from finding “places and spaces between words in the text of One Hundred Years of Solitude by Gabriel Marquez.” Did you gain a new understanding from the book through this process? Have you ever been surprised by something you uncovered?

MG: As I stated, the process can really be exported to any text. It can be a pamphlet on radiology or something by Jane Austen, but this text really speaks to me. The book chronicles the history of Latin America from just before colonization through to the 20th century. It really talks about the rich possibilities and many failures that Latin America has suffered throughout its turbulent history. It captures in many ways the stories that my parents shared about the beauty of our culture, and of the poor choices that we made throughout the centuries. It also chronicles the incursions by various American governments and corporations and how those affected the economies of the region. In many ways, it talks of the sort of leftist thinking that my parents had and instilled in myself and my sister as we grew up as immigrants in Ohio.

RB: In addition to text, you also use visual points of reference that come from places such as “the visuals in the background of Star Trek,” or as "remembrances of soccer jerseys bouncing like molecules on the field of a World Cup tournament.” When you use visual points as a reference, do you work from a photograph or from memory?

MG: I do sometimes work from the visuals of Star Trek. When I watch episodes of the various series, I will often sketch grids, lights, and patterns from the show. These are then translated to paint.

RB: How does your history as a Latinx immigrant with a “familial affinity with science fiction imagery” inform your work? What’s your favorite work of sci-fi?

GB: Star Trek is, hands down, my favorite work of sci-fi. It was my father’s favorite, and I grew up watching it. We would watch parts of the original 1960’s series after he came home from work, and we would watch the movies when they came out. It’s been a part of my life since I can remember, and the stories that it tells are so nuanced and aspirational that I cannot help but still be in love with the stories all these years later.

RB: I found an interesting quote from your website where you discuss the nature of painting and how it has changed:

Being a painter means not being on the forefront of the world any longer. Easel painting after all has a history that goes back 500 or so years. It’s not to say that we cannot find great pleasure in making, looking at, discussing, and reading about the subject, but we have to accept that there are other (perhaps better) ways in which to be more directly involved in the political and ideological discussions around us.

Being of this opinion, have you ever considered working in other media? Why paint?

MG: Why paint, indeed? I have dabbled in other media on occasion, but I never find the same joy in those that I do in painting. Maybe I’m just better at painting than at video or sculpture, or perhaps I’m just more comfortable in my two-dimensional safe space.

For better or worse, I am a painter. I paint and I deal with its limitations and conceptual frameworks. It is a slow process, and it reacts slowly to the immediate digital world that we inhabit. But it lets me explore my interests and it lets me express my own visions.

RB: How do you know when a work is finished?

GB: That’s the magic, right? A work will sometimes tell you when it is done, and you know it right off the bat. Sometimes a work is coy, and you must coax the finished version from it.

MG: More paintings. Some drawings. Constantly considering other media (and doing nothing about it).

I am now working with a different printing of One Hundred Years of Solitude, which gives me different patterns on the pages. So, I will keep exploring the abstraction being brought from the text. I hope that maybe looking at the work a viewer will be able to gain some insight to me, and I hope this furthers a conversation on painting and art.

Michael Giles is a Venezuelan-American artist working primarily in painting and drawing. He has exhibited internationally, and currently lives and works in Knoxville, TN. Born in Maracaibo, Venezuela, he was raised in rural Baltimore, OH. He studied as part of the Reciprocal Exchange Program at Edith Cowan University (Perth, Australia) in 1996, received a BFA from The Ohio State University (Columbus, OH) in 2000, and an MFA from the University of Tennessee (Knoxville, TN) in 2007. He is currently an Assistant Professor of Art at Lincoln Memorial University in Harrogate, TN.