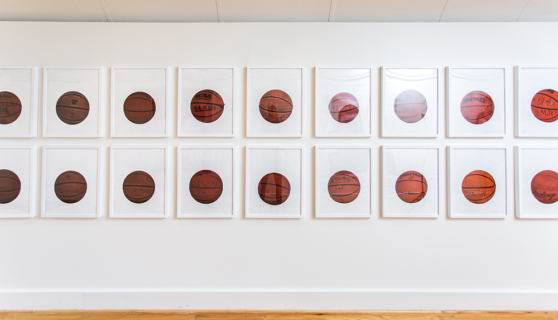 Rachel Bubis: In your current body of work, you explain that collecting is part of your practice. Have you always collected stuff? If so, what are some examples of your collections? Where does this desire come from, to keep hold of things?

Thomas Sturgill: I collected baseball cards and whatnot, as a kid, but I think my main influence is that I grew up on family land in a house that contained multiple generations worth of stuff in it. Random objects from my great grandparents, grandparents, parents and my brother and me. My grandfather owned a couple stores so those inventories eventually got mixed in as well. My dad still uses maybe 40-year-old stationary from the Western Auto Store that closed in 1986. They were not hoarders at all but there is a melding of these layers of history into a one house hold that I always related to “collecting”, not with purpose necessarily but rather practice. I have always been surrounded by objects many with stories and purpose.

I’m sure these will pop up in another project at some point.

I’ve been collecting objects as an art practice to find my personal visual culture, which is a baby step of an attempt to actively incorporate myself in to my work, something I’ve kept at arm’s length for many many years, but realize that it's now unavoidable.

RB: How would you describe your “personal visual culture”?

TS: “Personal Visual Culture” is a term I use to describe what aesthetically defines my specific lens or vernacular that I see the world around me through (and also what I produce I guess).

Specifically, in relation to my recent work, I use it to talk about what I’m visually attracted to…this initial “grab” certain objects have over me. The writer JB Jackson uses the term “immediate sympathetic appeal” when talking about things he finds with a certain personal resonance. Why am I attracted to certain things and why am I not attracted to other things?

RB: You work in a large array of media, including chalk drawings such as Self Portrait (After Brancusi). Do you feel an affinity towards the Romanian artist?

TS: The University of Tennessee gave me a pretty strong formal education in Sculpture while my MFA from Carnegie Mellon was completely interdisciplinary and strongly conceptual. Whatever media is needed is what I utilize to best serve the project. Life would be so much simpler if I could just commit to doing one thing.

My only really specific attraction to Brancusi (or for that matter Donald Judd or Rodin or Louise Bourgeois) is that I am theoretically affecting the same world that they affected. Even though I dabble in many different media, I consider myself a sculptor. My work, even on the smallest of scales, still exists in a material world with Brancusi’s work and I think I have to acknowledge that from time to time.

RB: In your work Outer Air, is that your mother’s handwriting that you converted into a font? Can you tell me more about that process and the relevance of the dust broom?

TS: That show was a deviation from my previous work for me, honestly, and I truthfully used it as a way to process this sudden and severe cancer diagnosis my mom got a month or two before the opening. In the space there were two long walls. One wall contained both my mom’s writing sample I asked her to do and the digital collage I made using my message about these notes she used to write (my words) but in her handwriting. This was in my mind - the processing and investigative side of the gallery. It was me honestly dealing with the news. I had those brooms in my studio and used them as both a visual design anomaly as well as a marker for doing “active work”. If that wall was about processing the situation the other two walls were more about “synthesis”. They were the pieces I made after creating the digital collage work and putting the parts and ideas back together.

RB: In Just One of Many Honors and Karate Belts you display collections of trophies and karate belts, objects that are normally “won” by athletic achievements, but in this case, I assume were purchased at a thrift store? What does it feel like for you to buy and own these? Have you held on to or let go of any of your own awards from your youth?

TS: In this process of collecting as an art practice, I really try to let the process guide the work. I will buy things and then eventually realize that I have a collection building. I realized early on that I was collecting things other people earned. I “earned” them too but, you know, with shopping.

Ultimately, I had the same proof that a marathon runner had (a medal) but I just had 50 of them. This grew. It’s largely tongue-in-cheek and self-deprecating. I find this work equally funny and sad. What kind of guy surrounds himself in unwon honors? If I put my name on the trophies it had to be in the simplest and least authentic way possible. I wanted no illusion that I had actually won all of these awards in the conventional way. Everyone I know with trophies from their youth also have a certain level of guilt about them. They can’t throw them away, but simultaneously they do not want them. I feel like I’ve absolved many people by absorbing that guilt. Now I’m the sucker sitting on a pile of stuff that I can’t bring myself to throw away. Collecting is a trap.

The karate belts had an “out.” I bought donated karate belts until I found a black belt. Earning my black belt in “buying karate belts” allowed for me to finalize that collection. I had reached the top!

RB: I love the concept of Pulled Resources Collaborative, which you describe as “swiftly constructing large, labor intensive projects in relatively short periods of time and with fairly modest budgets.” Did you encounter anything unexpected while taking these on? Do y’all have anything coming up?

TS: Pulled Resources started in 2005 and still continues although, admittedly, it has slowed down as we both started having kids and changing jobs. Dan (DeZarn) lives in western New York as the Director of Sustainability at SUNY Geneseo. These projects have been full of surprises and unforeseen events. The thing Dan said one time was that if you work on projects that are large and fascinating, then people feed on that fascination and want to be part of that. I’ve seen this time and time again. As we worked on these projects I’m constantly surprised by the help people offer and interest people have. There is an energy I don’t feel when working on my personal work.

TS: I’m currently working on many underdeveloped project ideas and working on a show proposal that embraces where my life is now while building on the Outer Air show. I’m drawing a lot and taking lots of photos. I feel like most of my work over the past 6 years or so has been more investigative and experimental and I’m interested in learning from those investigations to really develop a few more restrained and polished shows. This last year and a half have had many BIG life changes including death and new life. I find myself thinking a lot about these seismic shifts to the way I encounter the world. There has been a fundamental jolt to how I encounter the world and I want to talk about that. I am revisiting ideas of landscape and time/change that I haven’t thought about since grad school. I’m excited that maybe this revisitation of ideas I had 15 years ago will tie up some loose ends or make me better understand what I was investigating back then.

Thomas Sturgill was born and raised in Pound, Virginia, a rural company town whose heyday had long passed. In 2002, he received his undergraduate degree in sculpture from the University of Tennessee, Knoxville. Sturgill received an MFA in Interdisciplinary Arts from Carnegie Mellon University in 2006. He has exhibited domestically and internationally. He works both solo and collaboratively. Sturgill is a founding member of the artist collective, Pulled Resources. He currently lives and works in Nashville, Tennessee.