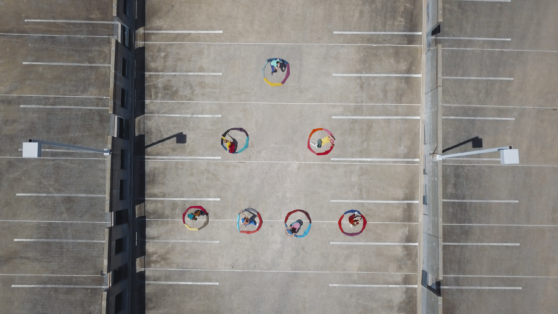 Notes by Jana Harper on This Holding: Traces of Contact

"I began working on This Holding several years ago with a simple question: 'What are the burdens we carry? And what might they look like?'

In the process of researching, I talked to hundreds of people in dozens of community workshops: doctors, dancers, middle-school kids, college students, retirees, folks from many different countries, and from all walks of life. I always start by asking them to name the burdens they carry and together we make a list. To be sure, each group has specific weights they bear, but in the end, we share the same fundamental human concerns: we worry about our loved ones, our futures, our planet, and of course, our health.

In March of 2020 as we were preparing for a May performance of live music/dance/visual art at OZ Arts Nashville, the pandemic struck and we needed to rethink how to present our work. We knew that large public gatherings would be prohibited for quite some time, so we decided to pivot to film. The one-hour performance was edited down to 5 scenes and below are some of my thoughts about these scenes."

"We are introduced to the burdens as external objects. They stretch out long, behind the performer, and her task of dragging them up the hill seems almost Sisyphean. Eventually she becomes entangled in such a way that movement becomes impossible."

Scene 2: Late afternoon (at the end of an unused runway).

"This scene represents a flight of fancy or mindscape. It presents a surreal exercise exploring restriction, confusion, and the relationship between internal and external self. The scene results in static isolation and though it might be viewed as a way to break out of the problem posed in Scene 1, ultimately the solution is untenable."

Scene 3: Night (outside the factory).

"As we descend into the darkest hour of the night, and the mind takes on a life of its own, burdens are measured, weighed, and counted. This is a transformative scene and eventually we develop empathy for our burdens, and realize that through compassion there might be hope."

"In this last scene, we celebrate bodies and gestures that have learned to live with the burdens placed on them. These are the gestures of everyday life with no effort to escape. Each mover is isolated in their own defined space, but they are together and a sense of collective lightness is rediscovered."

"The duets play an essential role between the other 4 scenes. They represent holding in its tenderest form."

"The drone played an integral role in the first and fourth scenes. It offers a birds eye view, allowing the possibility of a broader picture."

"Health note: every effort was made throughout the filming of This Holding to maintain a safe distance and observe health protocols. And in case you were wondering, the duets were cast with dancers who were in isolation together."

Jana Harper is an interdisciplinary artist whose work explores the themes and tensions between materiality and transcendence, chance encounters and human willfulness, relationships and connectivity, and human acts of meaning making. Originally trained as a printmaker, her work takes many forms, and she works both individually and in collaborative settings. Her work is held in several public collections including the Library of Congress, the Sackner Archive for Visual and Concrete Poetry, J.S. Blanton Museum, Proyecto Ace Print Collection, and the Janet Turner Print Collection. She is a recipient of a National Endowment for the Arts award in support of her project This Holding, which premiered online via OZ Arts Nashville on May 29, 2020. Recently, her collaborative performance Cargas was the closing event for Intermittent Rivers, the Matanzas portion of the Havana Biennial. Jana is Associate Professor of the Practice in the Department of Art at Vanderbilt University.