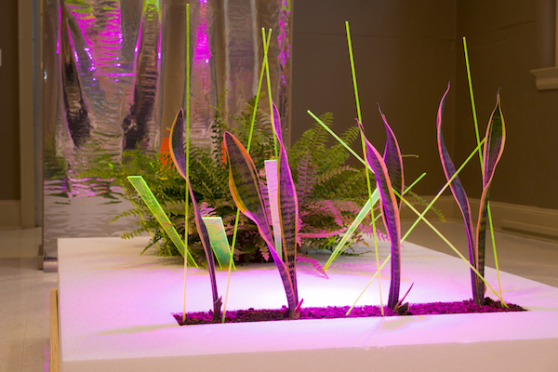 Vanessa Mayoraz: [Walking around her recent show “Between You and Me” at the Reece Museum in Johnson City, TN]. This installation is the second version of an installation titled “Infrastructure” that I showed this summer in Switzerland.

Amelia Briggs: Are the sketches and 2-D work on your website mock-ups for large scale installations like this one?

VM: I tend to see everything in 3-D even though I do a lot of work in 2-D. This piece was done from a sketch. It is my intention to turn those diagrams or maps into installations. Everything that you see is a visual clue that stands for some meaning. All the plexi is used as a representation for Monsanto’s headquarters. I use a lot of triangles, holes and arrangements to talk about industrial agronomy and how we tend to use crops. The reason why these plants are like this is because we think we understand, we do research, but it trickles down to the larger public incomplete. Long story short there is this superficial understanding. That is really important to my work, the part where we think we understand but we only have partial answers. We can’t really understand everything, nature is a lot more complex than we think.

AB: So does a ton of research go into these installations before you make them?

AB: Yea, I would imagine. Does it normally begin with research or a sketch?

VM: The research comes first. I am a very curious person and enjoy having discussions with many different people. That is why I also really like teaching in a University environment. I am able to go to lectures and have that connection between science and art. For me everything is interconnected. A project usually begins with something captivating my attention. I try to crystalize the information, then put it in space and time. I enjoy researching; it is not a burden for me.

AB: Do you often present a lot of text with these installations? Or do you let the viewers figure it out for themselves?

VM: Up until now I did not use much text. I used to really try and give a pure aesthetic experience and then I realized that often people don’t really look at the text first, so now I give more insights.

AB: I imagine that would be good for this work because you would wonder if something was missed.

VM: Yea, I guess it depends on the audience. There are a lot of layers and it comes out more in conversations with people, with you or curators, they will get access to all of the layers. I think that ideally I would like to share that with everyone but I am fine with the fact that there are different entry points. 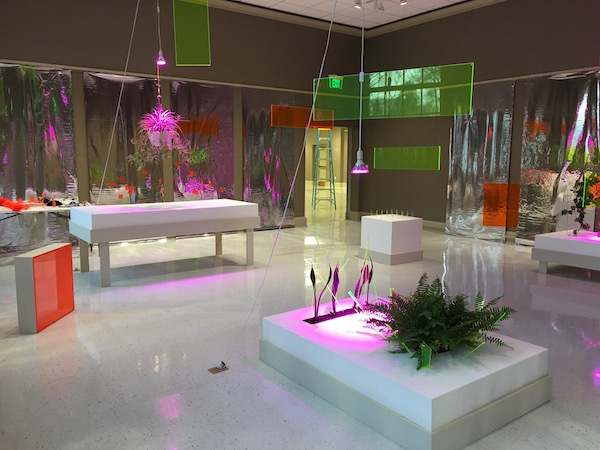 VM: The main difference is the lights. For example, you see the pink? It was a happy accident. I wanted more neon colors but it wasn’t making any sense. The windows in here have UV protection so there is no light for the plants, they can’t survive for long. I started ordering grow lights online and when they came they were pink. As I was working and installing in the space the pink really started to grow on me and it made sense to have them in there. I am thinking that this installation will be like According to Raleigh in that I will make several versions.

AB: That was the piece with the light bulbs?

AB: And you did multiple versions?

VM: I did, each involved going to a place, ordering light bulbs and redrawing a map of the city where the show was happening. Then everyone could exchange a light bulb or just leave a light bulb, signifying on the map where they would place it. There was this idea of is it the truth, are they going to do it or not? It’s about trust, it’s about participation and connection.  It’s also very much about the idea of interdependence between the work and the person who is going to take care of it, so it doesn’t exist if there is no investment. According to Raleigh was in many different cities; New York, Washington, Miami, Redlands CA, Belgrade, it started in Poland. It was the first work I did once I graduated from the Bauhaus. It was a great work to expand upon and learn from.

AB: Do you feel like it changed a lot every time?

VM: It did and it didn’t. Now looking back it looks the same. However I know that from one place to another it was completely different. It was almost like a revealing of participation with people in general within a city. I don’t know, maybe I am reading into it, but it wasn’t boring to redo it because every time felt so different. 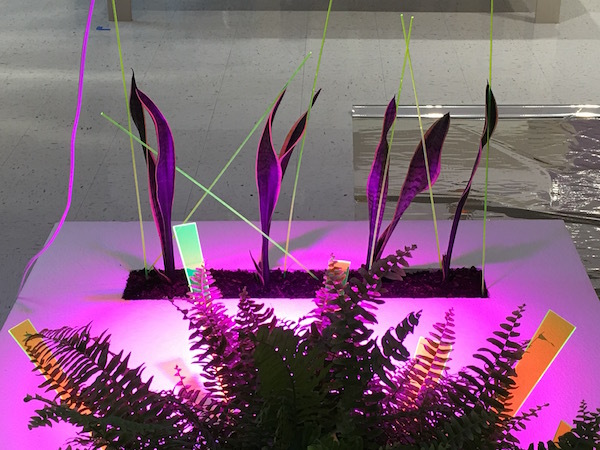 AB: That’s interesting to think about how the level of participation can tell you a lot about your audience.

VM: Yea and the audience is very important to me. The idea that it’s non-hierarchical is also a part of the work.

AB: Do you work with assistants?

AB: Have you been using participants for a long time?

VM: I have been doing this since 2006. According to Raleigh was the first.  I have on my website a very early work, I hadn’t even graduated when I made it, the cube piece.

VM: That work is there because it is really the beginning of everything. In 2000 I got sick, a massive allergy that landed me in the hospital for many weeks and they put me in an induced coma for two or three weeks. During that time I had a lot of experiences so that when I woke up it felt like an alternate life…it was not a dream, not reality but something else in-between. They were supposed to put me under for three days and when I woke up it had actually been 13. It was very shocking at 23 years old to realize that…I had to learn to walk again. It made me very aware of the body and memory, loosing memory or having a hole in the memory. It took me a while to realize how it trickled down into the work. For example in the cube piece people needed to take off their shoes before entering the space, so participation just naturally progressed from there.

AB: Yea, that’s so interesting that that’s how using participation began for you, through that experience.

AB: Have you ever had any issues using participation in your practice?

VM: I think I would be lying to say it is not an issue. I want there to be an exchange, so we each get something. I think the struggle can be in emotional weight or involvement, which can be intense. It taught me that no matter how much research or preparation I do things will change, otherwise I don’t think it’s relevant. I think it needs to go through that deconstruction and reformation. 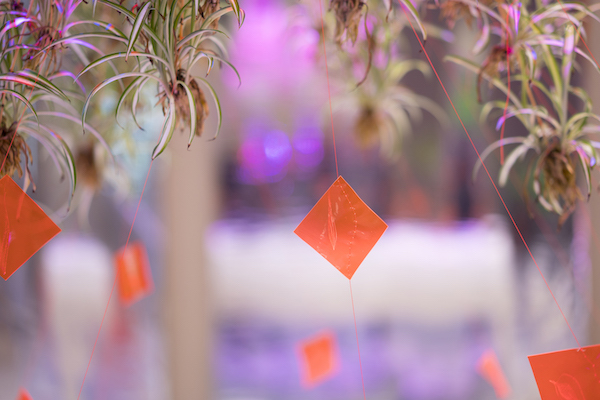 AB: So you made the cube while in undergrad, in Switzerland correct?

VM: I went to undergrad in Geneva, Switzerland, and I went to graduate school in Germany at the Bauhaus.

AB: So now you split your time between Switzerland and Tennessee?

VM: I continue working there. Most of my shows up until now have been in Europe. Now I am looking into doing more residencies and exhibition here.

AB: There must be a stark difference between Switzerland and Tennessee.

VM: Well there is but there is not. In terms of the environment it’s close to Switzerland, like flowers and nature. But yes it is very different, but it’s actually in some ways less different than New York and Geneva.

VM: Especially East Tennessee. I really don’t know anything about where you are, but East Tennessee has a massive amount of story telling and blue grass music, it contains a lot of good stuff. It is a non-pretentious and extremely creative place. Community is very important, that part is similar to Switzerland. In terms of aesthetic it is very different.

AB: How has teaching influenced your practice? Have you been teaching for a long time?

VM: I have been teaching since 2009. For me it’s always been very important to teach because I got so much from my teachers. I truly believe in education, that is my way to contribute to society in general. So more specifically I try to share what I am discovering at the time with the students. I am creating an Extended Media program here at the University. It’s a concentration within the Studio Art department. It is crystalizing into using extended media as a way to look at traditional forms of art, asking how do you go past that, or how do you expand upon it.

AB: So what is the major focus of this new concentration? Does it have a digital component?

VM: Yes, I have a 3-D printing class, laser cutting etc. It is really to demystify all those methods of working. I always visit other departments, the engineering department, computer science etc. So we are going to create a class that is going to be a combination of computer science and art. It is really important for me to break barriers. I realized that I am more complete as a person and artist when I realized that my interests besides art feed my art.

AB: Yea, coming from an academic environment myself I think that is so important to open up the doors for students to make connections with other students. Much of the time you are so isolated in your own department. It’s good to have those connections and learn what other people are doing.

VM: I think it makes for a more sustainable practice, because you will not always be in art school.

AB: In your statement you talk about the difference between studio practice and public practice, the personal and common. How does this balance play out in your own practice?

VM: That is really important for me. I thought that when I graduated from the Bauhaus that I needed to choose between being a public artist and a studio artist. Then I realized that I could be both and needed to be both. The human body and mind is in connection to the way we exist so it’s very natural to be public and private. The studio part is my way of processing everything. There is a part of studio practice that doesn’t go with public practice, which is just mine, where I can seemingly control everything.

* All images of "Between You and Me" (Reece Museum, Johnson City, TN) courtesy of the artist.

Vanessa Mayoraz is an artist and educator living in Johnson City, TN. She received a BFA from the Haute Ecole d’Art et Design in Geneva, Switzerland and an MFA in Art and Public Spaces and New Artistic Strategies at the Bauhaus University Weimar in Germany. Her work has been exhibited nationally and internationally including Qui Vive! Young Artist Moscow Biennial, the Museum of Contemporary Art of Belgrade, Le Commun at the Building of Contemporary Art in Geneva, Switzerland, Chashama Gallery in New York City, The Gallery of the International Pavilion in Ulsan, South Korea and the DC Art Center in Washington DC, among others. She has been performing various workshops and lectures on subject such as « artist as archivist » and « contemporary art practices ». She is the recipient of a Pro-Helvetia national Swiss grant as well as a Swiss Cultural Program in the Western Balkan grant.

Amelia Briggs is an artist, educator, and writer based in Memphis, TN. You can follow her writing on Art Yak.