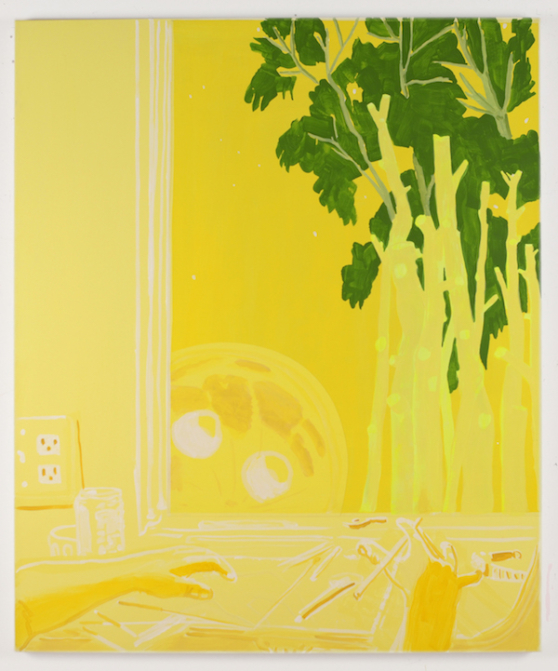 Eleanor Aldrich: It seems like there are reoccurring characters that appear in different roles throughout Soft Bark. Do you think of the work in the show as related to theater or portraiture? What is your relationship to these subjects?

Paul Collins: The subjects of the paintings are all cut trees from my neighborhood. If they’re portraits, then the portrait is of my romantic projection onto those trees. So I’m using the forms of the trees, but the trees stay aloof and (marvelously) alien. Thinking of theater, this might be a play on the King Kong story where man goes out into the wild to capture and bring back an ape for performances where he might ride a little bike and wear a funny hat, but Kong is a giant wonder regardless and never really plays along no matter how they might hope to dress him up.

EA: Do you find the painting, like Kong, has it's own mind? Its own desire? Do you think of how you interact with the image, whether printing or drawing from it, in terms of metaphor?

PC: Hmmmm. Painting as an act has no mind, but is part of a generational groove that is hard to escape or is inescapable. I love artists who find a way to escape and make work that demonstrates their own limitations. I don't know why painting is sooo sticking (offers such resistance or showing it's own desire, own mind, etc.), but I think it's because it's so time heavy and material light and thus prone to paralysis-by-analysis. I once heard an artist working in metal say he could never paint because paint wasn't heavy enough.

As for metaphor and image, I am so excited about working through image because it always exists both metaphorically and factually. 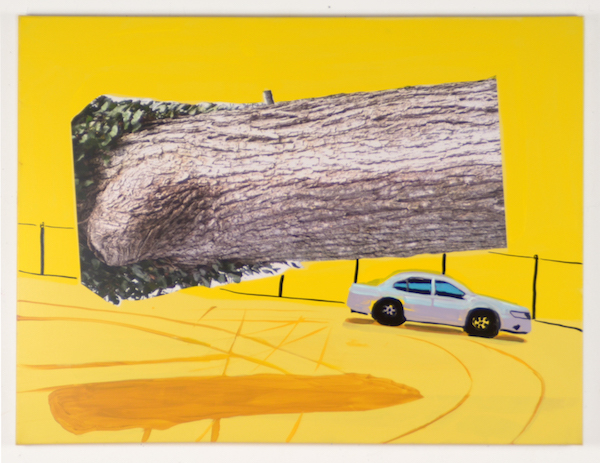 EA: Yes- paint’s material presence is often minimal, and usually masquerades as something in the image. There is this great moment in your painting Exodus– you have this blatant cut-out photo, but then there is this car that it is hovering over that is both painted quickly and is almost photographic. It somehow bridges the visual weight of the photo to the paint of the canvas.

I read you are reading Chromophobia— has it affected the color pallet for these last groups of paintings? Has it affected your thoughts about color in general? Where does taste fit into this?

PC: David Batchelor’s Chromophobia is great in that it does a creative and convincing job of outlining our cultural bias against color. I see Taste as a big ball of negative bias whose only function is to guide the saying of ‘no’. As such, it’s not a framework I trust.

EA: Can you talk more about the “weight of the rendered mark” (you mentioned in the Zeitgeist interview) as opposed to the quick, un-blended or initial mark? Does it have a relationship to labor and/or care?

PC: I use the term ‘weight of rendered mark’ to cover all painterly brushiness that is thoughtful enough to slow down the eye of the viewer. Sure it denotes care and labor, and also control and style and history so it’s very loaded. The casual mark that speaks of a denial of care is harping on that same language of value. The field of painting is drunk on value speak through mark to the point where image routinely means nothing. I am MOST interested in image above all else, and however the marks work out, great. Images are scandalous and sexy! 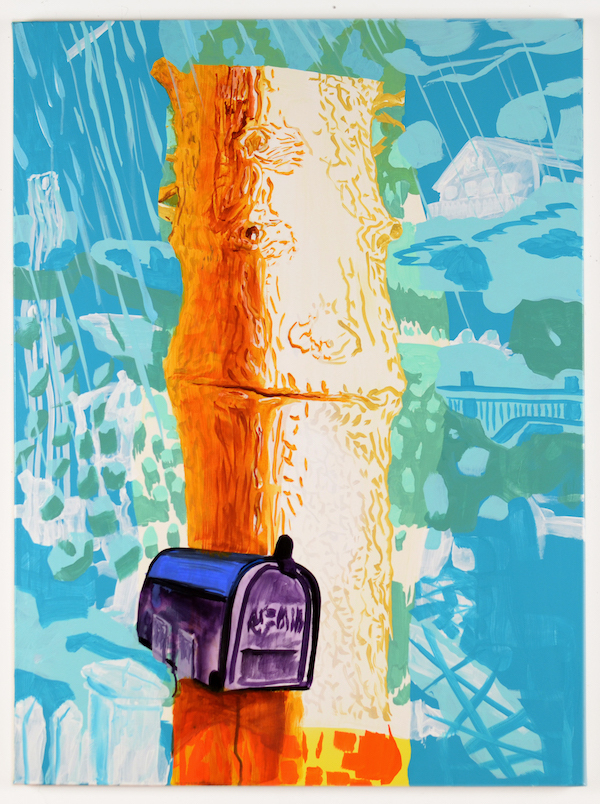 EA: Tell me more about your process of selecting images. Does the amount of images available today, via sites like Instagram, diminish their scandalousness and sexiness for you or change how you work?

As for images, I slowly develop my images through photography, drawing and painting, and sometimes sculpture or installation. The Image is meta and it can be seen in a flash or built over months. In recent years, I have favored using images that are recognizable as daily occurrences loaded with metaphor and questions. Images are sexy and scandalous when the maker shows a whole recognizable world that is different that our own. That's a type of advocacy and story-telling I love.

About my process of selecting images: I like things that look normal so that it's the noticing of them that is special rather than a unique moment or arch of action. It's been my experience that showing normal deliberate images can lead to a recognition by the viewer of things in the world AFTER leaving your show that then look like your work and so your work becomes viral in that way. I'm thankful to friends who have sent me all sort of sad tree pics after seeing my show. These trees all started as dumb photos; 8-foot mug shots in profile. Then they were collaged into the very center of a canvas and decorated in an attempt to speak AT them as dumb (nonparticipating) subjects without a landscape reference. I wanted my speaking at them to be problematic, like I was mansplaining nature to them.

I am aware that photography (and THE IMAGE) is probably undergoing a multi-generational realignment through their use on the web and especially social sharing. I'm old. Yes, I take photos and I think of each and every snap as a unique song containing the universe (even the mug shots). That conception probably dates me. But, images are different. Images are always propaganda. In reference to the earlier realignment, I might guess that we're seeing a degradation of the power of image through sharing but that may be presumptuous... it could be that it leaves a big door open to more image-making with more power.

EA: You write that “The paintings are absurd to a degree that they differ from recent past works. That absurdity is a multipurpose container for a range of simultaneous reactions: sadness, awe, anger, confusion, self loathing, hilarity & drunkenness...” What is absurd to you about these? Dada’s springboard was WWI- did you have a precipitating event for this series?

PC: Oh gosh, now I feel small. These works are in reaction to micro personal experiences, not world events. I’m really fortunate and have never fought in war, although many of my students have. I’m more of a bad gardener and a dreamer… About their absurdity: there’s a picture of a tree hugging a telephone pole, and another with the tree trunk floating away across a parking lot. If that’s not absurd, then maybe silly is the term. 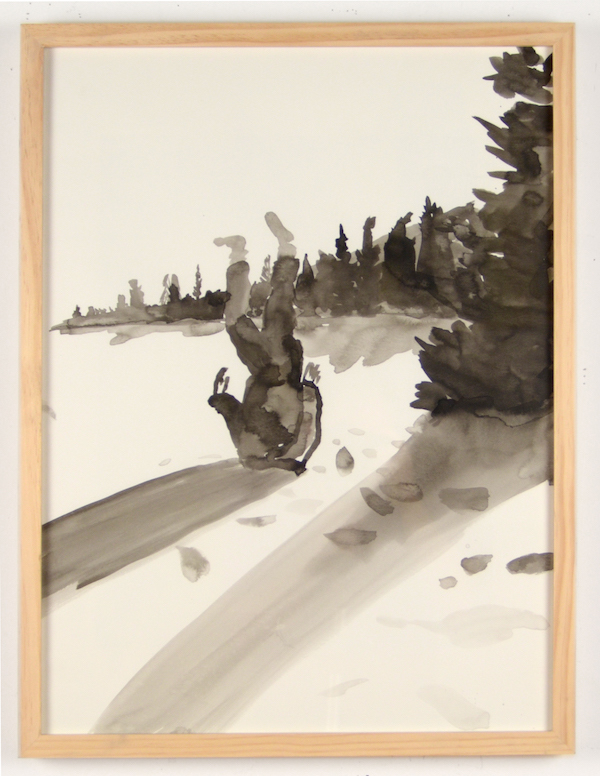 EA: Speaking of absurd: during the 2012 election, Mitt Romney said about being back in Michigan that “the trees are the right height” which he was ridiculed for. You have lived in Colorado and Brooklyn and Tennessee- are the trees fundamentally different?

PC: Yes. There are no trees in Brooklyn and in Colorado at 8,000 feet there’s pine trees and aspen trees and that’s about it. I LOVE the crazy diverse tree growth here in Tennessee. In my neighborhood they are disappearing fast and these paintings are a song to them as they float away!

EA: What do you like about working in Tennessee? How would you characterize the contemporary art scene?

PC: I like the scene here. Very open and welcoming and non-hierarchical. It breeds collaboration and great hangouts.

EA: What artists are you looking at these days?

EA: I am interested in your citation of Maxfield Parrish- what in particular are you struck by in his work?

PC: Maxfield Parrish because of the crazy honey light and dreamy (even creepy) fantastical forest scenes.

EA: Thanks for speaking to me about your work.

* All images of courtesy of the artist.

Paul Collins is an artist, curator, and teacher from Nashville, TN. Paul received his MFA from Yale and has been a resident at Skowhegan, Anderson Ranch Arts Center, and the Vermont Studio Center. His recent work has been featured in New American Paintings, Art Voices, and Fresh Paint magazines. Paul is represented by Zeitgeist Gallery in Nashville, teaches at Austin Peay State University, and is a member of COOP Curatorial Collective. His show “Soft Bark” at Zeitgeist runs through April 30 and his initial interview about this show may be found on the Zeitgeist Gallery blog.

Eleanor Aldrich is an artist based in Knoxville.