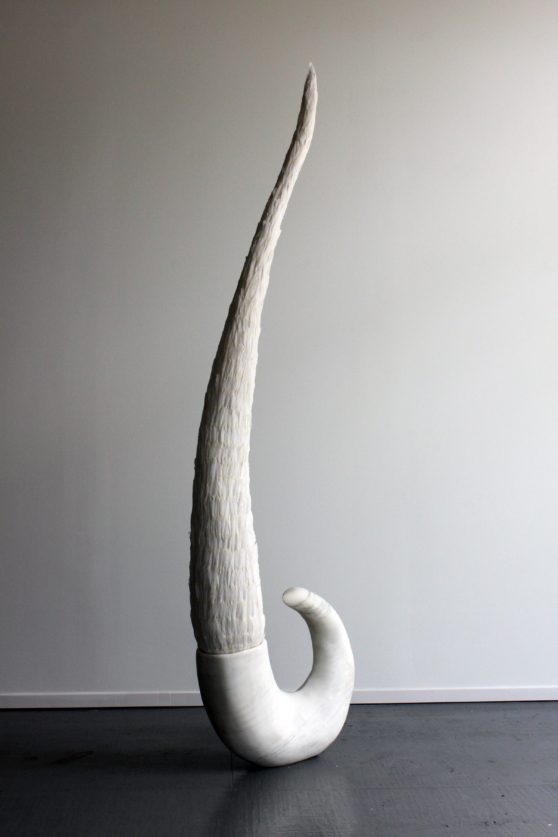 Jody Stokes-Casey: With being selected to exhibit in State of the Art at the Crystal Bridges Museum of American Art and being named a John Simon Guggenheim Fellow, you’ve had an impressive bout of major successes recently. Congratulations!

John Douglas Powers: Thank you! Being named a Guggenheim Fellow is a tremendous honor and has certainly been a welcome surprise. My inclusion in State of the Art was—and continues to be—a really magical experience.

JSC: Will you please introduce yourself and your work?

JDP: The first access point for most people is probably the fact that the work moves. I’m interested in the poetic possibilities of the mechanism and movement and how that can relate to both objects and images. My educational background informs these interests; I have an undergraduate degree in art history from Vanderbilt University and an MFA in sculpture from the University of Georgia. My practice is fed evenly by those experiences, moving fluidly among history, theory, material, and process. I’m fairly omnivorous when it comes to content. 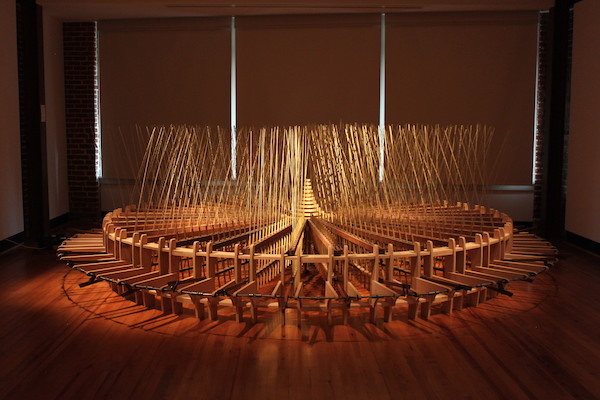 JSC: I’ve been in communication with Stephen Wicks, the Barbara W. and Bernard E. Bernstein Curator at the Knoxville Museum of Art (see more below), and it seems like the exhibition is a must see. What works will viewers have a chance to experience in Contemporary Focus?

JDP: We’ve put together a grouping of three works for this exhibition, Omphalos, Locus, and Revenant. In some ways that may sound like a sparse show, but because of the multi-sensory nature of the work, it feels right for the space.

JSC: What is the uniting theme of these selected works?

JDP: In different ways, each work addresses the ideas of both the center and of the unseen. 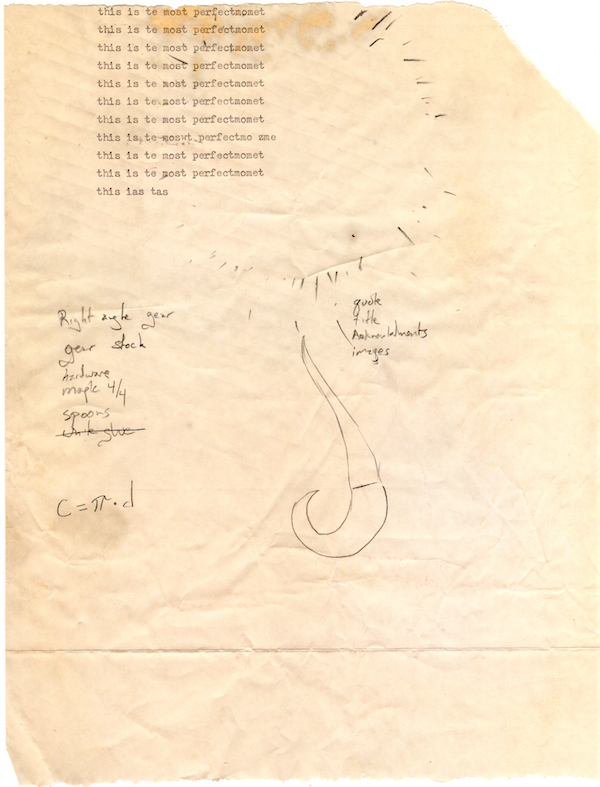 JSC: The sketches for Omphalos provide a little behind-the-scenes insight. Could you give us more information about your creative process?

JDP: The works take a variety of forms, from kinetic sculpture to carvings, videos and drawings, so the process tends to vary. Some pieces like Omphalos, which involved carving stone, call for a lot of sketching. Sometimes that is in a sketchbook and other times I just want to capture what is in my head right at that moment, so I find myself doodling on whatever is at hand. The mechanized works tend to arrive as a more complete mental image and then call for prototypes to puzzle out the mechanism and proportions.

JSC: The kinesthetic sculpture Locus is an exciting addition to the exhibition and is representative of your portfolio of work. What would you like to share about the mechanics of it?

JDP: In many ways Locus is the culmination of the last seven years of work exploring different mythologies and images associated with paradise, like the Elysian Fields. Visually the structure is referencing stupas and Etruscan tumuli, among other structures.

Mechanically, it involves a series of articulated spokes driven by a camshaft that wraps 360 degrees around the form. Because of all the multiples and the tolerances involved, a lot of preliminary “sketching” was done in 3D modeling software to help determine proportions and spacing and such.

JSC: Why do so many of your works rely on movement? How does the kinesthetic element help you to communicate as an artist?

JDP: I’m particularly interested in the way time-based work relates to a viewer. In a painting or a print, my own feeling is that the work exists separate from me. It is an illusion of some kind and, in its most powerful forms, transports me somewhere else.

Time based work has the potential to do the same, but by engaging our own physicality and temporality it can also underscore the present space and moment. I see this as a productive complication in the work. As though it becomes more real because it is so open in its falseness.

JSC: Locus also provides a soundtrack to your exhibition. The movement of the sculpture creates sounds, which provide an environment to view not only the sculptures, but also the video piece.

Why is sound an important element in your work?

JDP: I see sound in this case as enunciating the aforementioned physicality and temporality of the work. This sound is not a recording, but rather the by-product of the imperfect mechanisms involved. The sound is immediate and unmediated, but is read in the context of the visuals. It simultaneously underscores the motion of the work and expands upon it. It helps to communicate mood and ideas of ephemerality while also functioning as another level of the sculpture asserting its presence.

JSC: Would you describe the relationship between the sound of Locus and the animated pinhole photographs from St. Louis 3 cemetery in New Orleans? How does this relationship impact the viewer’s experience?

JDP: Sound is waves, energy emanating from a point. Compositionally, sound can tell us about the flavor, character, or mood of something, but it also tells us about space and proximity. Sound is a physical thing, though we don’t always think of it that way. We use it everyday to recognize our friends or find our phone when it’s ringing. We intuitively understand the relationship between sound and its source. Sound is incredibly eloquent and we are all steeped in its language.

The video projection in this case is an animated sequence of digital pinhole images. Because of the multiple pinhole lenses used in the process, the individual images are grainy and atmospheric. Some portions of the images are more exposed than others resulting in artificial horizon lines. Some parts of the images are also double exposed, resulting in overlapping imagery.

I like the questions that arise from these aberrations, specifically the calling in to question of point of view. The mirroring of the video of course calls Rorschach imagery to mind while the motion of the animated images points to the center line, a seem or crease, where the clouds exit frame and disappear. The sounds created by Locus become a soundtrack for these moving images, but a soundtrack physically dislocated from the image.

JSC: In another interview you mention the tensions and conflict between sound and movement in your work. You said, “At once you are simultaneously in your own reality and the reality that the work is referencing.” Can you elaborate on that quote?

JDP: This goes back to the idea of the illusionistic in art and purposefully short-circuiting that quality. I’m hunting for a metaphorical figure ground kind of push/pull with the work where it can be literal and figurative at the same time. I remember spending a few hours watching Christian Marclay’s The Clock,

JSC: In the video on your website, you mentioned poetry, literature, and history as influences on your art. Is there a particular piece of writing that profoundly resonated with you or inspired your philosophy of art making?

JDP: I can’t really cite a single written work; it feels more like it happens in aggregate. The inspirations for individual pieces are often connected to writing, but typically from various sources ranging from Radiohead lyrics to Homer’s Odyssey. Sean Carroll’s From Eternity to Here and Douglas Rushkoff’s Present Shock are two books of recent interest.

JSC: What do you want viewers to leave with after experiencing your work at the Knoxville Museum of Art?

JDP: I hope people enjoy the visit and maybe go home with some questions.

JSC: What is the date/time of your presentation at KMA?

JDP: Our opening reception for the exhibition is Thursday, May 5 from 5:30-7:30pm. I will be speaking about my work at the KMA on June 15 from 5:30-7:00pm as part of their Cocktails and Conversation series.

Stephen Wicks, the Barbara W. and Bernard E. Bernstein Curator at the Knoxville Museum of Art, was generous to answer a few questions about the role of KMA in promoting contemporary art. His answers are summarized below.

Jody Stokes-Casey: How long has KMA been producing Contemporary Focus and what is the selection process for featured artists?

Artists are selected by KMA’s curatorial team through a multi-step process beginning with the review of artist recommendations from artists and curators as well as artist submissions. The curatorial team makes selected studio visits and schedules follow up conversations before reaching a consensus.

The exhibition concept is fluid, featuring multiple artists grouped by common technical, formal, or conceptual aspects of their work or emphasizing a single artist, like John Douglas Powers, for example.

JSC: What attracted KMA to John Douglas Powers's work? Why was he selected for this year's exhibition?

SW: Members of the curatorial team had followed his work for some time. We were impressed by its originality, far-reaching ideas, complex and varied forms, and skillful execution. We took the KMA’s collectors to visit John and were impressed by how effective he was at talking about his work.

JSC: What does the museum hope visitors walk away with after viewing the Contemporary Focus exhibition?

SW: Several things. First, visitors should walk away knowing that exciting, new, contemporary art is being produced in East Tennessee. There are artists choosing to stay here to make artwork rather than heading to New York, Chicago, or LA.

Second, a single object can function on many levels. Those levels reveal themselves to the patient viewer regardless of whether or not the viewer is an art expert.

Third, visitors should leave the museum knowing contemporary art can take many compelling forms. Each form of contemporary art offers its own point of entry into the artist’s world. Entering this “world” offers an intimate encounter with an artist’s creative process. The resulting forms and images express larger ideas that drive the artist’s practice.

In the case of John Douglas Powers, video, kinetic sculpture, and installation art are the forms allowing us to enter into his world and view the broad spectrum of his interests: including memory, language, music, technology, and dualities such as absence/presence, and nature/culture.

* All images of courtesy of the artist.

For more information on Contemporary Focus and other upcoming exhibitions at KMA visit knoxart.org.