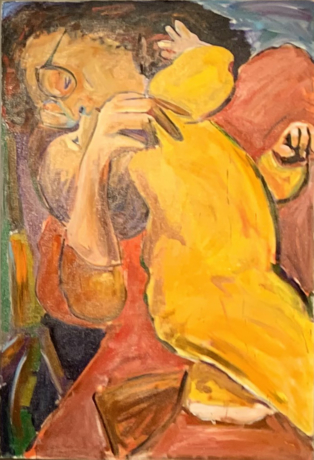 Field of Life: Monument Structures is a retrospective spanning fifty years of work from 1970 through 2020. Dyer began teaching at East Tennessee State University in the fall of 1983. He earned an AS in Graphic Design at Virginia Western Community College (1971); a BA in painting at James Madison University (1974); and MFA in painting at Radford University (1983). From 1973 through 1981 he founded/owned Graphic Arts Advertising, trading as Dyer, Maddox, and McArthur, in Roanoke, Virginia, whose industrial clients were nationally and internationally based.

“The desire to express ideas in visual terms is the basis of my work,” Dyer states. “I see my art as a vehicle that allows communication of ideas and experiences based on social and/or political issues to challenge the viewer. I do not want nor do I expect anyone to be comfortable with my work.”

Included in the retrospective are series of works that manifest those challenges—Death Watch, Life Watch, Viet Nam, Polish/Russian insurgency, Construction, and Film. Undergirding the retrospective is Dyer’s passion for teaching and for social causes.

For thirty-five years, he has been a disabilities advocate accomplishing many goals in that community. For his 1997 work in helping craft changes to the discipline portion of pending amendments to the Individuals with Disabilities Education Act (I.D.E.A.) and testifying before the 105th Congressional I.D.E.A. Working Group in Washington, D.C., Wayne was awarded the Tash International Collaboration Award in 1997 in Boston, Massachusetts. Additionally, in 1997, Wayne, his wife Barb, and their daughter, Carrie, received the President's Award from the National Down Syndrome Congress in Dallas, Texas.