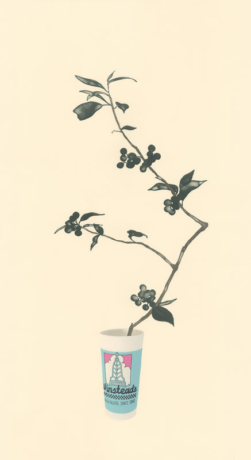 Coop Gallery presents its fourth annual summer series of exhibitions entitled House Guests. For the months of July and August, Coop has handed over the space to PLUG Projects, a curatorial collective of six artists based in Kansas City, Missouri.

The Things We Takeaway unifies the works of Kansas City-area-based artists Yoonmi Nam and Andrew Ordonez under the themes of ephemerality and irony and provides a closer look at how we interact with the seemingly-mundane.

Yoonmi’s series of lithographs and sculptural objects illustrate her consideration of life’s impermanence and her interest in the new lives disposable objects take on. Her Arranged Flowers prints repurpose styrofoam cups and takeout boxes as vases for uprooted flowers, quietly inviting the viewer to notice the inevitable expiration these items face.

In his concrete structures that take the form of carry-on items one might casually come across while waiting in an airport terminal, Andrew invites viewers to inspect their ideas of (im)mobility, identity, memory, and abandon. A spectator might wonder what the TSA’s X-ray would reveal about the contents and what could be learned about the owner’s values, secrets, and life.

Yoonmi Nam was born and raised in Seoul, South Korea, where she studied printmaking before moving to the United States. She has worked for 18 years as a teacher and faculty member at the University of Kansas in Lawrence. In her own words, Yoonmi and her work are “interested in beauty, irony, inevitability, and the common and extraordinary way we structure our surroundings.” Her projects have been exhibited throughout the US, from spots in San Antonio and Raleigh, to galleries in Provincetown and New York. She has also taken her work abroad, establishing a presence in Japan, Sweden, and Paraguay, among other countries.

Born in Fort Worth, Andrew Ordonez grew up in Arlington, Texas. Andrew studied painting at the Kansas City Art Institute, and upon graduating he realized his background in this discipline complemented his interests in sculpture and three-dimensional art. While working as an admissions officer for his alma mater, Andrew traveled frequently and in doing so was able to cultivate inspiration for his work, many of which read as memorial in nature, moments and movements literally cemented into a human-made conscience. His work was most recently seen in the Young Latinx Artists 23 exhibition at Austin, Texas’ Mexic-Arte Museum. Andrew’s work tends to incorporate an intersection of Latinx and queer identities.

PLUG Projects is a curatorial collaboration and exhibition space run by six Kansas City artists who share the mission of bringing fresh perspectives and conversation to the local art community. Their goal is to energize artists and the public at large by exhibiting challenging new work, initiating critical dialogue, and expanding connections of artists in Kansas City as part of a wider, national network of artists.