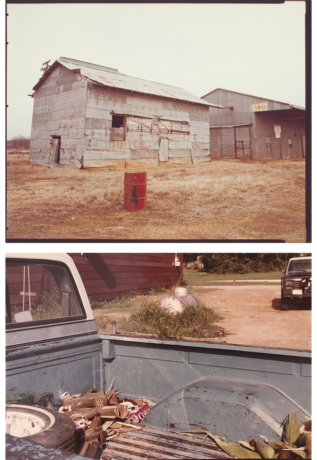 David Lusk Gallery Nashville kicks off 2023 with SOUTHERN IMAGE TAKERS, an exhibition of photographic works by William Christenberry and William Eggleston. Both photographers from the Deep South, Christenberry and Eggleston began their careers with Brownie cameras, taking photographs that embodied the psychology and effects of place and memory.

Born in Tuscaloosa, Alabama, in 1936, Christenberry originally focused on painting, graduating with a BFA from the University of Alabama in 1958 and an MFA degree in painting in 1959. He joined the UA faculty after graduating before he moved to New York City in 1962 where he met Walker Evans. Evans’ photographs of the Black Belt region of west-central Alabama - Christenberry’s Hale County - influenced Christenberry to focus on photography, and he moved back to the south as a professor of art at Memphis State University. In 1968, Christenberry moved to Washington, D.C., to teach at the Corcoran School of Art, and he continued to make annual pilgrimages to the South to document the effects of time’s passage on the region. While Evans encouraged Christenberry to take his photographs of the South seriously, Eggleston is often credited with inspiring him to embrace color photography. Along with Eggleston, Christenberry is hailed as a pioneer of color photography as a fine art medium. His small, straightforward snapshots, though documentarian in execution, were influenced by memory and personal association rather than observation.

William Eggleston, born in Memphis in 1939, was instrumental in establishing color photography as an art form and spurring the art world’s recognition of the medium. Though a student at Vanderbilt University, Delta State College, and the University of Mississippi, school was a low priority for him, choosing instead to focus on the work of Henri Cartier-Bresson, Robert Frank, and Walker Evans. He began his career with black-and-white images, but soon abandoned them for color photography, capturing the beauty and monumentality of the mundane, everyday, and ordinary so that the real subject was color itself. His breakout show, Photographs by William Eggleston, at the Museum of Modern art in New York in 1976 cemented his legacy, legitimized color photography as fine art, and launched his career. By that time he had been photographing in color for over a decade and experimented with color transparency and dye transfer, creating a portfolio of c-prints, dye transfer photographs, and pigment prints. He published a number of portfolios, photographed several film sets, and completed album covers while continuing to focus on ordinary life in his hometown, elevating the everyday to an idealized, monumental form in saturated color. He continues to live and work in Memphis.

SOUTHERN IMAGE TAKERS features 10 works each by Christenberry and Eggleston. Each artist focuses on place as memory, color as subject, and employs time as medium, subverting expectations of photography as strictly documentarian or for commercial advertising and creating a shift of consciousness. Supermarket interiors, churches, crossroads, filling stations, scrubby landscape, shacks, farmland, and shop windows make up the majority of these artists’ portfolios - with some notable variation. The two artists’ defining subject matter exhibited in two strong lines of works how they sprung from the same well of late 20th Century Southern image takers. Christenberry’s photographs memorialize bygone eras; Eggleston’s work glamorizes the present; both share a unique closeness to tenants of cultural and symbolic reverence.

David Lusk Gallery is located at 516 Hagan Street in Memphis. Gallery hours are Tu-Sa, 10-5. For more information or visuals please contact Lees Romano at 615-780-9990 or lees@davidluskgallery.com.