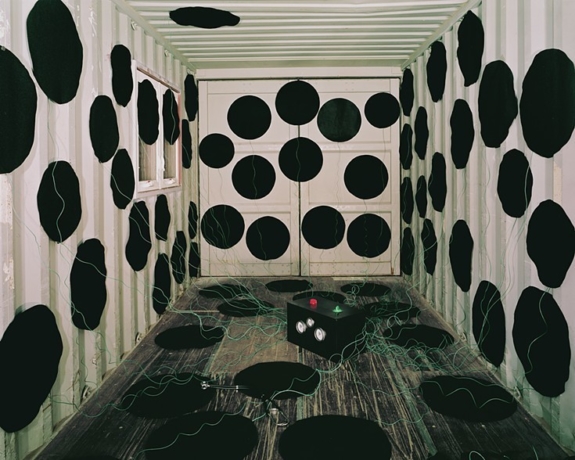 The term twilight used to seem mysterious to Sarah Hobbs, in a poetic and romantic sort of way. But the more her mind dwelled on the idea of it, the more unsettling and confusing it became. The word sounds lovely, as if it doesn’t belong to its true meaning, which is a period of ambiguity or gradual decline. Twilight is the space between the known and unknown.

Hobbs is interested in the various ways we attempt to cope in this space. There are those who are fine to live in twilight -choosing to be removed or feeling comfortable with not having to make choices or changes. But, there are also those who cannot abide it. How one might attempt to deal with the ambiguity is the essence of this work.

Twilight Living is an exercise in topoanalysis – the psychological study of the sites of our intimate lives. What do we do in our private spaces to assuage our anxiety in the ambiguous times in which we live? There is a weighing down on all of us these days, on our society, and so much of the anxiety of our time is social (and much of that spurred on by politics).

Sometimes we dance around topics, trying to feel out another’s philosophies. “Am I going to find myself aligned with this person or opposed?” Turning inward can be a detriment, but we are all so wary of our fellow man, of conversing freely, that it feels like a comfort now to metaphorically hibernate.

The idea of turning away from reality and doing something rash or impetuous, simply as a release or as a way of feeling one has control over something, some act of creation or destruction, acts as a kind of psychological panacea.

In addition to impromptu behavior, the act of collecting is a careful, methodical practice seen in this work. Collecting is also a type of soothing. But constantly, obsessively looking for (or making) items (of no actual value) to save is not really experiencing life. Collecting feels like an accomplishment, but it isn’t really. “It is more than an impulse... it is a defensive move, initially with the aim of turning disillusionment and helplessness into an animated purposeful venture...it is a device to tolerate frustration... “(Muensterberger, Collecting: An Unruly Passion)

This idea of salvaging the self and the life one knew is an avoidance of society today and all that entails. We are in a truly ambiguous period at present, but in holding on to a past that was comfortable, one cannot move forward in life. One cannot make progress. One is trapped in twilight.

This exhibit will be on view at the gallery from January 16th to February 20th. Opening reception will be January 16th from 6-9pm. Please be considerate of our neighbors and staff by wearing a mask if you plan to attend.