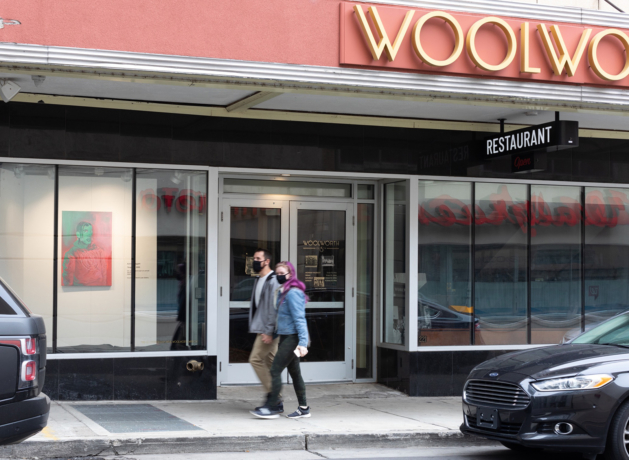 Woolworth Window is pleased to present Target #2, a new painting by Ashley Doggett on view at 221 5th Ave. N. from November 2020 to January 4th, 2021. There will be an opening reception on Friday, November 13th from 6-9pm.

The Woolworth Window is a new contemporary, non-traditional art gallery located in the front window of the Woolworth building on 5th avenue in downtown Nashville. It is always open. Just walk by.

The Woolworth Building was the location of the lunch counter sit-ins in Nashville that helped bring an end to racial segregation at lunch counters and bring the civil rights movement into focus. These peaceful protests were organized by the Nashville Student Movement and the Nashville Christian Leadership Council, and were notable for their early success and emphasis on disciplined non violence. This movement led the way for desegregation in Nashville and many other states. Many of the organizers, including the late Georgia Congressman John Lewis, went on to be significant leaders in the civil rights movement.

Our first show features artist Ashley Doggett, whose paintings build upon the ongoing movement and honor the historical significance of this space. In her brightly-colored, figurative works, Doggett recontextualizes racialized imagery, undermining the hold of whiteness on the power of depiction. In her reckoning with the representational violence of the past, Doggett articulates a way forward through ongoing structural and systematic violence and white supremacy. The paintings take on an almost mythological significance in their portrayal of pop-cultural and historical subjects, in line with artists such as Kehinde Wiley, Kara Walker, and Kerry James Marshall. Doggett’s work engages the politics of representation--who represents whom, for whom--a question which is inevitably determined by the group in power. Doggett’s paintings are each battlegrounds on which racist narratives might be contested, reclaimed, and overthrown, one-by-one.

Ashley Doggett is based in Nashville and received her BFA from Nashville’s Watkins College of Art in 2018.