THE SCULPTURE OF WILLIAM EDMONDSON: TOMBSTONES, GARDEN ORNAMENTS, AND STONEWORK 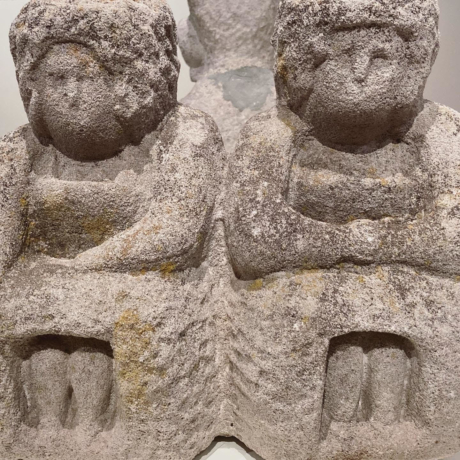 THE SCULPTURE OF WILLIAM EDMONDSON: TOMBSTONES, GARDEN ORNAMENTS, AND STONEWORK

William Edmondson is one of the most renowned sculptors to emerge from Nashville, and today he remains one of the most important self-taught American artists of the twentieth century. Born in Davidson County to Jane Brown and Orange Edmondson, who had been enslaved at the Edmondson and Compton plantations, Edmondson would eventually purchase a property on Fourteenth Avenue in South Nashville’s Edgehill neighborhood. In 1931, at the beginning of the Great Depression, he began to carve limestone full time, embarking on a new career and business he operated out of a studio and yard on his homesite. He became a resourceful entrepreneur and an accomplished, creative carver. He made functional sculptural objects, meant to be seen in public spaces, like tombstones and birdbaths, but also drew from his environment, his spiritual traditions, and current events to create a diverse range of stone human and animal figures. Edmondson gained notoriety, nationally and internationally, during his lifetime for his work. He attracted local attention from neighbors, collectors, and noted creatives, including photographers Louise Dahl-Wolfe, Edward Weston, and Consuelo Kanaga, who came to Nashville from around the country to see Edmondson at work. In 1937, Edmondson became the first black artist to receive a solo exhibition at the Museum of Modern Art in New York. His experiences in Nashville, during the Depression and the Jim Crow Era, directly shaped the form, content, and reception of his work, but its reach and impact continues to extend far beyond the limits of the city in which his lived his entire life.