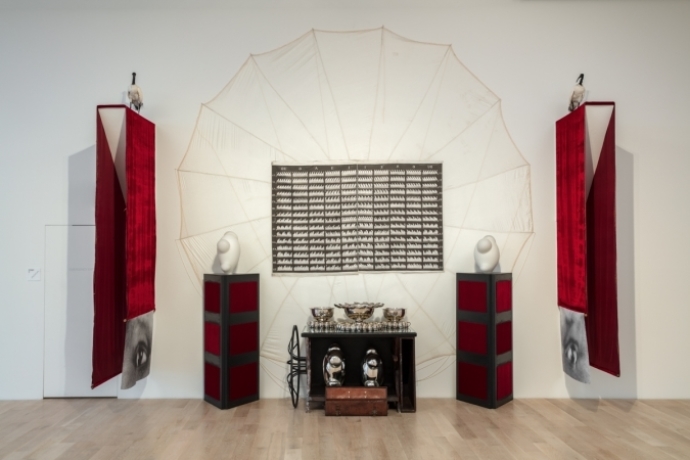 The Frist Art Museum and Fisk University Galleries present Terry Adkins: Our Sons and Daughters Ever on the Altar, concurrent presentations of sculptures, prints, installations, and video by the multidisciplinary and multimedia artist and musician, on view in the Frist’s Gordon Contemporary Artists Project Gallery from February 20 through May 31, and the Carl Van Vechten Gallery at Fisk University from February 20 through September 12. Presented forty-five years after Adkins’s graduation from Fisk University, the exhibition pays special attention to the influence that his time in Nashville had on the late internationally acclaimed artist.

“This is the first exhibition of Terry Adkins’s work in Middle Tennessee, and we are excited to partner with the Frist Art Museum to co-present it,” says Director and Curator of Fisk University Galleries Jamaal Sheats. “A Fisk University alum, Adkins was a member of the jazz orchestra and a disc jockey for WFSK Jazzy 88 radio station. However, the Fisk Art Department was his home. He studied under the then chairman of the art department and director of galleries, historian, and artist David Driskell. Adkins has credited Aaron Douglas, who founded the art department 75 years ago, as igniting his interest in art. Today, I see Adkins’s work and career as a beacon for the arts tradition at Fisk.”

Fisk University and the Frist will collaborate with the soon-to-open National Museum of African American Music to produce a multidisciplinary performance, featuring local talent inspired by Terry Adkins and his performance collective, the Lone Wolf Recital Corps.

Terry Adkins (1953–2014) was principally interested in the intersection of visual art, music, and African American history. First trained as a musician on guitar, saxophone, and other woodwinds, he approached his visual art practice from the perspective of a composer, often arranging series of works to create what he called “recitals,” many of which feature modified musical instruments or other salvaged materials. “One of his primary aims was to forge a link between music and art, reversing each discipline in order to make sculpture more ethereal and music more concrete,” says Frist Art Museum Curator Katie Delmez.

Throughout his career, Adkins also questioned the processes by which historical figures’ pasts become or do not become a part of the historical canon. “He mined African and African American histories for marginalized narratives and organized series of works devoted to either underrecognized figures or highlighted underrepresented aspects of well-known figures’ lives,” says Delmez. The works in Our Sons and Daughters Ever on the Altar pay tribute to the legacies of several influential and enigmatic figures, such as Jimi Hendrix, Bessie Smith, Dr. George Washington Carver, and Dr. W.E.B. Du Bois.