STORIES OF THE SOUTH 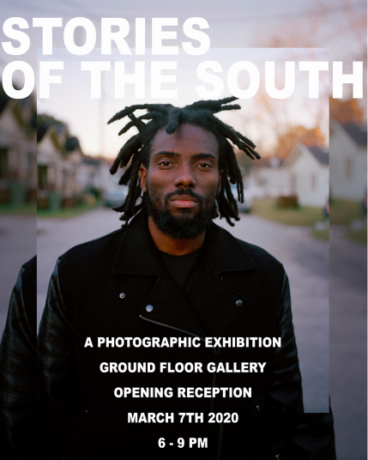 STORIES OF THE SOUTH

Stories of the South is a photographic exhibition featuring photographers based out of the South and those who have spent time in the region. This show is comprised of 15 artists including Phillip Abbot, Brennan Booker, Abbey Bratcher, Jemma Castiglione, Ashley Gates, Sarah Haig, Jessica Just, Cocoa Laney, Lara Morgan, Joe Nolan, Shannon Randol, Sarah Smith, Sean Thomas, Andrew Turner and Jordan Whitten. This show gives viewers an insight into the “New South,” where tradition and progression meet. Here we hold up many different experiences and voices that may have yet to be heard. In his personal essay, “Looking in the Mirror,” author Silas House describes the region of the South:

Stories of the South brings many diverse narratives together from what Sean Thomas captures of the hip hop scene in Savannah, Georgia to Jordan Whitten’s observations into the “array of tenuous relationships between mankind and controlling nature” surrounding the Boone Dam in Tennessee. Cocoa Laney explores the relationship between young women and non-binary people in many Alabama towns and visually documents “conversations about shame, religion, and gender identity.” Her “trip became a pilgrimage to find intimacy and connection in a region that can feel simultaneously familiar and inaccessible, even to those who know it best.”  This exhibition digs past the first layer of preconceived notions about the region and reveals 15 different versions of the real Stories of the South.