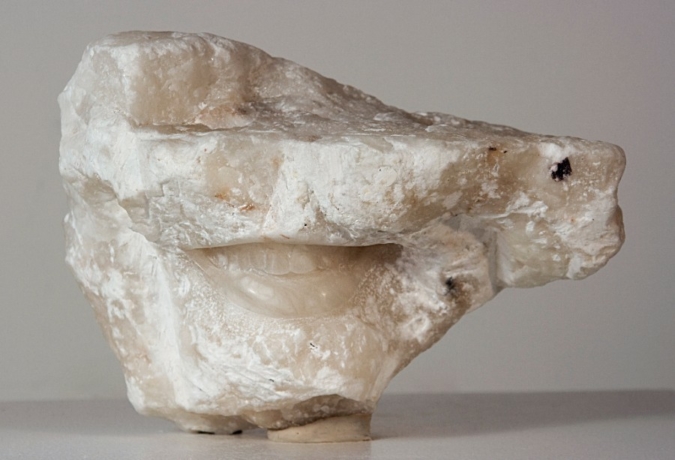 Zeitgeist Gallery presents States of Matter featuring sculpture created by women. The work included recalls the five changing states of matter and speaks to the malleability and hybridity of the female form.

The exhibition is curated by Karen Seapker and Vadis Turner and runs from January 6 - February 24, 2018. Please join us for an opening reception on January 6th from 6-8pm at Zeitgeist Gallery in Nashville.

Please join us for this pre-crawl artist discussion "A Conversation Around Sculpture Created by Women" moderated by Virginia Griswold.  Featuring artists Kristen Jensen, Ellie Krakow, and Vadis Turner (who each have work in States of Matter at Zeitgeist Gallery) and also Kylie Lockwood whose solo show The Fingertip Is an Image-Forming Organ of Sight will be on view at Coop Gallery.

Tickets are free. Please RSVP through our link to Eventbrite (below). No need to bring printed ticket day of.

Amy Brener (born 1982 in Victoria, BC, Canada) lives and works in New York. She was included in Greater New York 2015 at MoMA PS1. Her work has exhibited internationally at institutions and galleries such as Galerie Pact in Paris, Wentrup Gallery in Berlin, Derek Eller Gallery and the Katonah Museum of Art in New York, and Susan Hobbs Gallery in Toronto. Brener received the NYFA Fellowship for Crafts/Sculpture in 2015, attended Skowhegan School of Painting and Sculpture in 2011, and graduated with an MFA in Sculpture from Hunter College in 2010.

Kristen Jensen is an artist living and working in New York City. Her practice is interdisciplinary, often taking quotidian experiences and domestic objects and reinterpreting them in diverse mediums. The artist’s desire for control and perfection is challenged by both the unpredictability of the materials she chooses and the traces of the artist’s hand. This tension is reflected in the flaws, cracks, and subtle finishes that transform the mundane into things both pathetic and poetic.

Recent shows include a solo exhibition "Lighter, Later" and performance "Some Grace ll" at Miller Contemporary in New York City in the summer of 2017 and exhibition of works and the performance "Power Ballad" at NADA NY 2017. She has also exhibited domestically and internationally at Simone Subal, Wallspace, Nicelle Beauchene, and Bortolami Gallery among others. Jensen was also Abrons AIRspace 2016-2017 resident.

Ellie Krakow is an interdisciplinary artist who earned her MFA from Hunter College and her BA through study at Yale University and the Rhode Island School of Design. Solo exhibitions of her work have been shown at Miranda Kuo Gallery, NURTUREart, Thomas Hunter Project Space, Spring/Break Art Fair, and Cuchifritos Gallery. Recent group show venues include Field Projects, Thierry Goldberg Gallery, Present Company, Interstate Projects, and NARS Foundation (all NYC);outside of New York City venues include Wasserman Projects in Detroit, the Kingston Sculpture Biennial in Kingston, NY, the Pula Film Festival in Croatia, and MMX Open Art in Berlin. Her text-based projects have been published in VECTOR Artists Journal and Drain Journal of Contemporary Art and Culture, and her artwork has been featured in BOMB, Lookie-Lookie, The Stranger, and Dossier Journal. She is a recipient of a Boomerang Fund for Artists Grant and has participated in residencies at Skowhegan School of Painting and Sculpture, Yaddo, and Abrons Arts Center.

Shari Mendelson is a sculptor living and working in Brooklyn and Upstate New York. She has been the recipient of four New York Foundation for the Arts Fellowships (1987, 1997, 2011, 2017), a Pollock Krasner Foundation Grant (1989) and John Simon Memorial Guggenheim Foundation Fellowship (2017). She has participated in residencies including a 2014 residency at the Bau Institute/Camargo Foundation in Cassis, France. Also in 2014 she was a visiting artist at UrbanGlass in Brooklyn, NY, in 2015 she was an Artist in Residence at the Corning Museum of Glass, and in 2017 she was a Toledo Museum of Art GAPP resident. She has had solo exhibitions at Pierogi, Black + Herron Space, NYC, John Davis Gallery, Hudson, NY, and Todd Merrill Studio. She has participated in number of two-person shows, including a recent show at John Molloy Gallery, NYC, and has been included in numerous gallery and museum exhibitions including The Museum of Old and New Art, Tasmania, Australia, Houston Center for Contemporary Craft, Houston, TX and The Brooklyn Museum. Her work is in the permanent collection of The RISD Museum, Providence, RI, The Museum of Fine Arts, Boston, MA, The Museum of Fine Arts, Houston, TX, The Museum of Old and New Art, Tasmania, Australia, The U.S. State Department and the Cooper-Hewitt Museum.

Her work has been featured in The New York Times, Hyperallergic.com, Ceramics Now, Glass Quarterly, NY Arts, and Art on Paper.

With a degree in experimental animation from the California Institute of the Arts, Schulnik has films, paintings and sculptures included in many important collections, such as the Albright Knox Art Gallery in Buffalo (New York), the Nerman Museum of Contemporary Art (Kansas), the Farnsworth Art Museum in Rockland (Maine) and, in the state of California, LACMA, Santa Barbara Art Museum, the Museum of Contemporary Art San Diego and Laguna Beach Art Museum. The LA area artist has exhibited internationally, including four solo museum shows, most recently at the Wadsworth Atheneum, Hartford and well as group shows such as at the Albright-Knox, Buffalo, New York.

Lava Thomas is a visual artist whose interdisciplinary projects explore the space where autobiography, fiction and sociopolitical narratives converge. Central to her practice are notions of visibility, empowerment, resilience and healing, whether creating artworks that memorialize victims of racial violence, transforming galleries into spaces for contemplation and renewal or stretching the conventions of portraiture and representation.

Thomas is a native of Los Angeles, CA. She has been awarded Artist in Residencies at the Djerassi Residents Artists Program, Kala Art Institute and Headlands Center for the Arts (2017). She is a recipient of a Getty Foundation Grant, a Peninsula Community Foundation Grant and in 2015 was awarded the Joan Mitchell grant for Painters and Sculptors.

Her work has been exhibited at various institutions nationwide, including the Smithsonian American Art Museum, the Museum of the African Diaspora in San Francisco, The International Print Center in New York, The Museum of Contemporary Art in Boulder, CO, and the California African American Museum in Los Angeles. Her work is held in the permanent collections of the United States Consulate General in Johannesburg, South Africa, the Smithsonian American Art Museum in Washington, DC and the MH de Young Museum in San Francisco. Thomas studied at UCLA’s School of Art Practice and received a BFA from California College of the Arts. She is represented by Rena Bransten Gallery in San Francisco and maintains studios in Berkeley and Los Angeles.

Born in Nashville, Tennessee, Turner received a BFA and MFA from Boston University and has exhibited her work internationally. Selected exhibitions include the Brooklyn Museum, New York; National Gallery, Prague and Andy Warhol Museum, Pittsburgh, PA. Her work is in the permanent collections of the Brooklyn Museum of Art, 21C Museum, Tennessee State Museum, Kentucky Arts and Crafts Museum and the Egon Schiele Art Centrum.

In 2016, Turner was awarded the Joan Mitchell Painters and Sculptors Grant. Her first solo museum exhibition at the Frist Center for the Visual Arts and she will have a two-person museum show at the Carnegie Center for Art & History in 2018. She is represented by Geary Contemporary in NYC and Zeitgeist Gallery in Nashville, TN.

Patrice Renee Washington (b. Chicago, IL) lives and works in Queens, New York. Through a sculptural practice her work engages with fantasy, consumption, and the raw transitory stages of object-hood. She received her B.F.A from Metropolitan State University of Denver (2011), and M.F.A in Visual Arts from Columbia University (2014). Her recent exhibitions include We Buy Gold, Museum of Contemporary Art Denver, Sculpture Center, and MoCADA. She has completed residencies at the Abrons Art Center (2017), Robert Blackburn Printmaking Workshop (2017), Lighthouse Works (2017), The Museum of Arts and Design (2016), Anderson Ranch Arts Center (2015) and Vermont Studio Center (2014).

Saya Woolfalk (Japan, 1979) is a New York based artist who uses science fiction and fantasy to re-imagine the world in multiple dimensions. With the multi year projects No Place, The Empathics, and ChimaTEK, Woolfalk has created the world of the Empathics, a fictional race of women who are able to alter their genetic make-up and fuse with plants. With each body of work, Woolfalk continues to build the narrative of these women's lives, and questions the utopian possibilities of cultural hybridity.

She has exhibited at PS1/MoMA; Deitch Projects; Contemporary Art Museum, Houston; Contemporary Arts Center, Cincinnati; the Brooklyn Museum; Asian Art Museum, CA, Museum of Contemporary Art, Chicago; the Studio Museum in Harlem; the Frist Center for the Visual Arts; The Yerba Buena Center; The Newark Museum; Third Streaming; MCA San Diego; MoCA Taipei; and Performa 09; has been written about in the New Yorker, Sculpture Magazine, Artforum, Artforum.com, ARTNews, The New York Times, Huffington Post and on Art21’s blog; and has also worked with Facebook and WeTransfer. Her first solo museum show The Empathics was on view at the Montclair Art Museum in the Fall of 2012. Her second solo museum exhibition ChimaTEK Life Products was on view at the Chrysler Museum of Art in the fall 2014. She recently completed a new video installation commission for the Seattle Art Museum, and is a recipient of a NYFA grant in Digital/Electronic Arts. She is represented by  Leslie Tonkonow Artworks + Projects, NYC and teaches in the BFA and MFA programs at Parsons: The New School for Design.