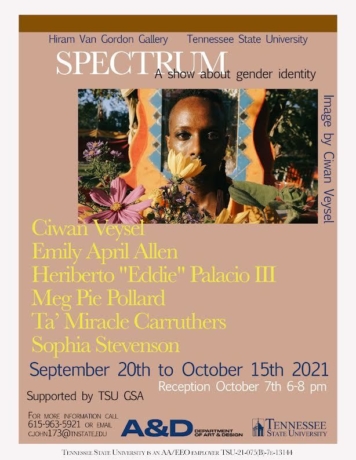 In SPECTRUM each artist looks at the interpretation of identity and the variety of ways the LGBTQ+ community exists and works to command space. The evolution of man spirals up, as we dissolve the binary, freedom of self-expression rains supreme, taboos dissolving. You can express yourself however you see fit.

A band of colors, as seen in a rainbow.

What is your gender identity? The definition of gender identity states the innermost concept of self as male, female, a blend of both or neither – how individuals perceive themselves and what they call themselves. One's gender identity can be the same or different from their sex assigned at birth.

Ciwan Veysel photo series "Black Queer Bodies Are a Protest" aims to create spaces of solidarity with the existence for black queer bodies as an existential political stance and visibility through art. The images of black femme bodies lounging in jewels, make-up, and amongst flowers, beautifully, casually honoring their authenticity. Emily April Allen portraits focus on the subject and their examination of gender identity through personal style. Heriberto "Eddie" Palacio III calls his large-scale digital paintings bromance, an urban term, an intimate, non-sexual relationship between two or more men. A tight, affectionate, homosocial male bonding relationship exceeding that of usual friendship and is distinguished by a particularly high level of emotional intimacy. They show us the love of a brother, a father, and a friend, examples of how men can show love. Artist Meg Pie Pollard's fun, colorful interpretation of women in zoot suits, bold curves, and boi/femme bodies shows us the representation that we have been missing, realness in bright, bold lines. Ta' Miracle Carruthers, a TSU sophomore, wants to make the campus more welcoming to those that represent the non-binary and transgender community. We often start with fashion, how we dress, the making of clothes has been a way to show and find community to build. Sophia Stevenson video performance lady-like addresses the traditional idea of what it means to be a woman, specifically responding to the sayings "act like a lady" and "sit like a lady." The performance work aims to complicate gender and sexual binaries, challenging the limiting conventions of normatively.

We would like you to consider social gender roles and expectations, examining how society uses those to try to enforce conformity to current gender norms of heteronormativity. This show is meant to be informative and insightful, introducing you maybe to new terms and new ways of loving everyone's differences.