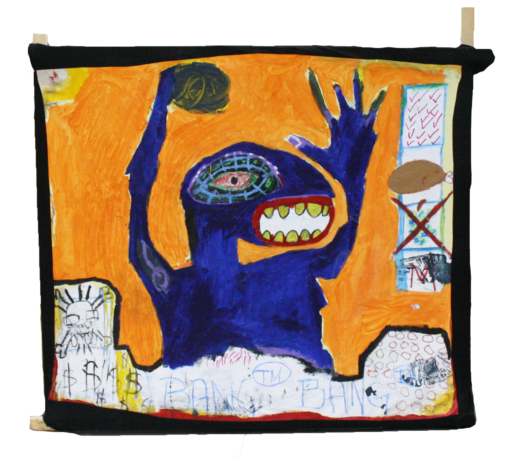 Red Arrow Gallery is proud to announce Slightly Dangerous!, a solo exhibition by Marlos E’van. Slightly Dangerous! opens on September 14th, 2019 at 6pm. A special discussion about the Artist and Exhibition will take place on October 12th with Nuveen Barwari.

Marlos E’van, the artist that brought you Dyin’ By Tha Gun!, YNP, and Made In Tha USA, is back with a brand new body of work that examines the fragility of life in the Trump Era. The majority of the exhibition doesn’t stifle itself by focusing on Trump primarily; it reflects and reacts to the anxieties and uncertainties of said era; from paranoia of nuclear attacks, the border crisis, and racial unsettling. Slightly Dangerous! also touches on themes like fast-food, commercialism, the first people that discovered fire and what happened to their family lineage after that discovery. Paintings, along with sculpture and installation art comprise this collection. Multiple surfaces of the paintings are repurposed window frames retrieved from the debris after hurricane Katrina.

Marlos makes art of the harsh, often self-contradictory ideologies on which America is built. E’van is interested in how dystopian landscapes speak to long-standing American social problems. Using found materials, obsessive mark-making, text, and hyperbole, they aim for their work to encourage dialogue among different classes of people. From athletes to historical figures, from cars to fast food, they use symbols to cross-examine stereotypes and institutions that perpetuate inequalities. Consumerism offers us both practical and impermanent symbols in our lives that, in some ways, have become standards of Western civilization. By changing the context of these symbols, they hope to transform them into instruments of meaningful reflection/understanding. During the duration of the exhibition, Red Arrow and the Artist will give 10% from all sales to the McGruder Center in North Nashville.

Nashville based artist, Marlos E’van received their BFA from Watkins College of Art, Design, and Film in 2016. From street art to canvases; from performance art to film-making, E’van interweaves different mediums such as painting, performance, and filmmaking to create worlds in which their art lives and has caught recognition from such publications such as Hyperallergic and Native Magazine. In addition to their work as an artist, E’van co-founded/co-designs M-SPAR, McGruder Social Practice Artist Residency out of the McGruder Center in North Nashville. Marlos E’van’s work is included in multiple local and national collections and currently is on view in the Murals of North Nashville Now at the Frist Art Museum. This is their first show with Red Arrow Gallery.