SKY KIM IS DIVING INTO THE MICRO-UNIVERSE. 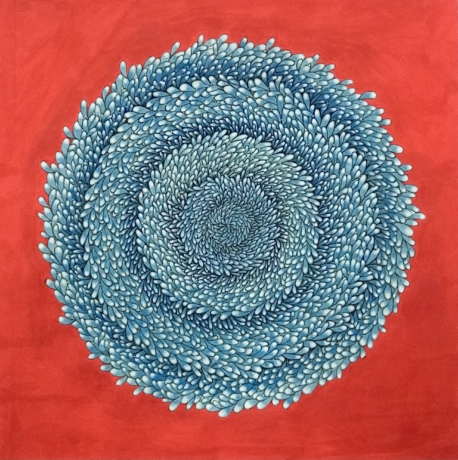 SKY KIM IS DIVING INTO THE MICRO-UNIVERSE.

Tinney Contemporary is proud to present Sky Kim is Diving into the Micro-Universe, a new body of work from masterful painter, Sky Kim.

“Everything, including life or death, occurs in the present moment. Therefore, the moment of Now is timeless and abundant.”

Sky Kim uses water-based paints to summon portals into the multiverse, each piece a swirling vortex of possibility. The paintings begin to bloom and dance when staring into their centers, a dynamism which defies the linear, deterministic flattening of time into past, present, and future. Instead, Kim’s works cultivate a meditative, embodied presence in the viewer. It’s from this same place that each piece finds its genesis–meditation is a key piece of Kim’s practice. Kim’s belief in reincarnation and transcendence of spirit, along with her interest in Sacred Geometry and quantum-physics serves as a well of inspiration for her work.

Attuned to the Micro-Universe, the cosmic contained in the molecular, she images this trance-like state in painstaking patterns of watercolor and crystal. There’s a yin-yang sort of push-and-pull between order and chaos inherent in the work, a balance of supposedly opposed forces. The works embody both unity and movement together: molecular vibration, the cyclical oneness of all being. Each piece invites the viewer into the cosmic dance of possible worlds, or other dimensions. Sky Kim contains multitudes, and so do you.

Kim was born in Seoul, Korea, and received her MFA from Pratt Institute. She is a recipient of the National Korean Art Competition Awards, a Pratt Institute Art Grant and Jersey City Art Council Grant. Her work has received critical acclaim in The Wall Street International, Juxtapoz Magazine, The Korea Herald, Artlog, Arts Observer, and more.

Sky Kim is Diving into the Micro-Universe will be on exhibit from January 8, 2022 through February 19, 2022. The opening Reception will be held from 2-8 PM on January 8th.