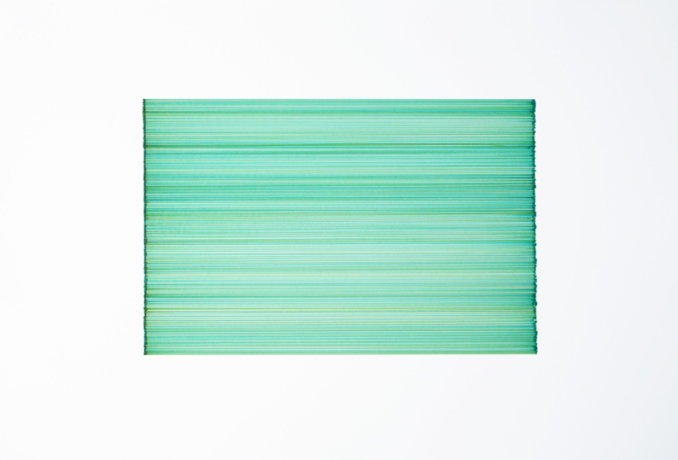 Selected Poems – works on paper is Lars Strandh’s third solo show at Zeitgeist. In this new exhibition Strandh shows a series of small sized color ink drawings. The drawings are, the same way as his paintings, built up by fine lines and layers. Every drawing has its own color shades and rhythm and stands like small visual poems open to be read by the viewer.

The drawings are drawn with ink pens and a ruler. Fine lines are made over and over again. Strandh has invested a serious amount of time in each drawing and the lines are all horizontal and overlapping in the different colored layers.

The drawings have small “mistakes”, slips and marks from the drawing process. All these small “errors” are actually adding the poetry in Strandh’s visual poems.

What kind of landscapes or mindscapes can we dream us into, or just as well dream or think out from, when we contemplate in front of one of those drawings? Is the drawing triggering some color memories or even the memory or feeling of a view you know?

1. (Poetry) a composition in verse, usually characterized by concentrated and heightened language in which words are chosen for their sound and suggestive power as well as for their sense, and using such techniques as metre, rhyme, and alliteration

2. (Literary & Literary Critical Terms) a literary composition that is not in verse but exhibits the intensity of imagination and language common to it: a prose poem.

3. anything resembling a poem in beauty, effect, etc

[C16: from Latin poēma, from Greek, variant of poiēma something composed, created, from poiein to make]