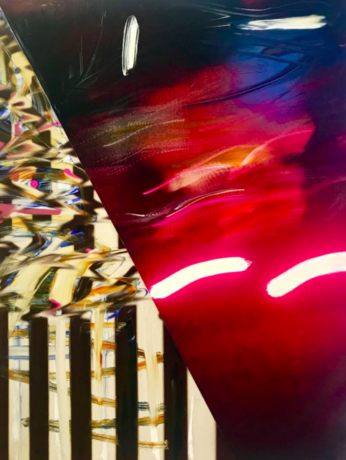 Inspired and activated by place, Pinkney Herbert is best known for expressive abstract paintings with dynamic gestures and multi-dimensional forms. Exploration and movement between his environments have shaped the core of his practice for over 30 years. With the cities of Memphis and New York as his primary influences since 2008, he examines the sights, sounds, and energies of a place - and his relationship to those - through mark-making and layering. In paintings and works on paper, he integrates bold graffiti-like gestures, planes of striking color and negative space, and mesmerizing digital prints in a fundamental yet transcendent form of processing his surroundings. Drawing additional influence from sources like art history, architecture, maps, music, and digital technology, his works become reflections of and vehicles through this dense, frenetic, saturated state of contemporary life. Through his practice, he strives to bridge the gaps and illuminate the connections between exterior and interior worlds, seeking clarity in the chaos.

Pinkney Herbert was born in Charlotte, NC in 1954, and splits time between studios in Memphis and New York City. He received his BA from Rhodes College and his MFA from the University of Memphis. Herbert is the recipient of Fellowships from the National Endowment for the Arts, the Tennessee Arts Commission, and USIA-Arts America. He has exhibited throughout the US, Europe, Japan, and Southeast Asia. His art is in numerous national and international collections and in the permanent collections of the New Orleans Museum of Art, Ogden Museum of Southern Art, Memphis Brooks Museum of Art, the Arkansas Arts Center, among others. Herbert is represented by David Lusk Gallery, Memphis, TN; Sandler Hudson Gallery, Atlanta, GA; Boyd|Satellite, New Orleans, LA; ADA Gallery, Richmond, VA; and Greg Thompson Fine Arts, North Little Rock, AR. He is also the founding director of Marshall Arts, an alternative gallery, performance, and studio space he established in Memphis in 1992. In November 2015, the Ewing Gallery of Art and Architecture at the University of Tennessee, Knoxville mounted a 30 year survey of Herbert’s work entitled Distilled: The Narrative Transformed which traveled to Crosstown Arts in Memphis. Herbert has taught painting and drawing at the University of Georgia Study Abroad Program in Cortona, Italy, and also at the Penland School of Crafts, the Arrowmont School, the Telluride School of Painting, Rhodes College, the University of Memphis, and the Memphis College of Art. He has been a visiting artist at the University of Tennessee, Knoxville, TN; the Academy of Fine Arts, Helsinki, Finland; the Institute of Fine Arts, Lahti, Finland; the Academy of Fine Arts, Prague, Czech Republic; University of Fine Arts, Hanoi, Vietnam; and the Oberfalzer Kuntzlerhaus, Schwandorf, Germany.