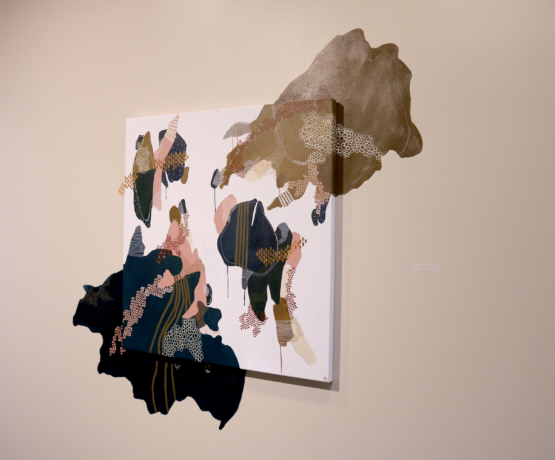 Presenting new work by Nashville artist, Tess Erlenborn. In this series, Erlenborn addresses shared human reactionary tendencies. The act of painting repeated patterns correlates to our specific way in which we handle and respond to inevitable traumatic or emotional occurrences in life. She muddles, confuses, or disarranges order in how she paints scattered fragments of biologically inspired patterns and textures, while also hinting at the way in which we compartmentalize and apply order and structure to our days, despite life’s inevitabilities. Drawing on patterns found in diseases, cell growth, and natural phenomena, Erlenborn then applies bright, playful, often considered feminine colors and creates compositions that mask and make light of these darker components, similar to the way we suppress and mask our true feelings and fears. Creating these compositions is therefore an escape for her; a literal representation of shared coping mechanisms. Expanding the compositions off the confinements of the canvases, and leaving negative spaces between the flow of the fragments, is to further apply disorder, and representative of the way in which our emotions, or personal baggage, has a way of revealing itself in unexpected, often unwanted, ways and breaks out despite our attempts to compartmentalize and contain them. She is blurring the lines literally by expanding these pieces out of their boundaries, but also in the way she addresses what is considered to be the socially acceptable, sane way to cope and what is considered insane.