RICHARD HEINSOHN: A PLACE FOR THE MIND 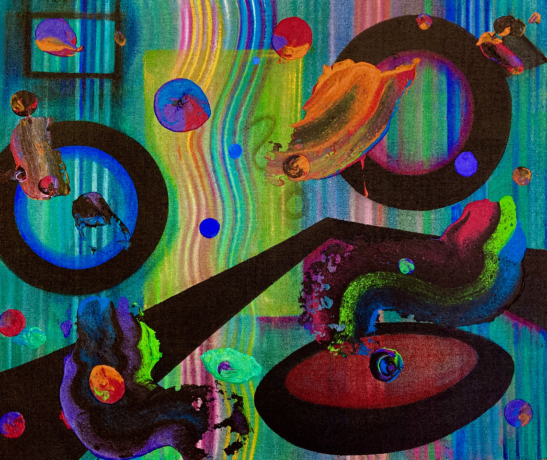 RICHARD HEINSOHN: A PLACE FOR THE MIND

Modfellows Gallery is pleased to announce a solo exhibition of abstract paintings on primed burlap by Richard Heinsohn. The title of the show, A Place for the Mind, refers to Heinsohn’s evolution away from years of explosive visual metaphors for cataclysm into works which synthesize expressionism and abstract surrealism with early, more meditative, geometric abstraction.

Since the 1990s, Heinsohn’s work has addressed climate change, impending cataclysm and cultural dysfunction in numerous bodies of work including his mixed media wall reliefs, his Time Frames series of photo-based abstractions and his turbulent, thickly painted, cratered abstractions. However, as mentioned in his recent statement:

“Given the current dysfunctional mayhem of our planet, I believe we need visual art that provides a place for the mind to transcend our calamity, to thoughtfully explore the multitude of unknowns connected to our daily lives and to thereby refresh our optimism and our sense of urgency in the reimagining of our existence.”

These new works channel the meditative properties of abstraction pursued by Kandinsky and Malevich, combined with intuitive approaches of accessing higher consciousness which guided Hilma af Klint as well as, much later, artists of Abstract Surrealism such as Gordon Onslow Ford, Roberto Matta, Wolfgang Paalen, Jimmy Ernst and the Abstract Expressionists whom they inspired. The core concept is that visual imagery can convey experiential sensations which invigorate the imaginations of viewers. Using a combination of varying textures, striated color and contrasting geometry, this work invites feelings of mystery and discovery, guiding the viewer into an unknown space and time.

Heinsohn earned his B.F.A. in painting and drawing from The University of Georgia in Athens. There he studied with celebrated abstract expressionist, Herbert Creecy, who became his lifelong friend.

After moving to New York City, Heinsohn eventually garnered the attention of historically renowned, visionary collector and art dealer, Allan Stone, who collected his work, supported him and included him in several shows at The Allan Stone Gallery.