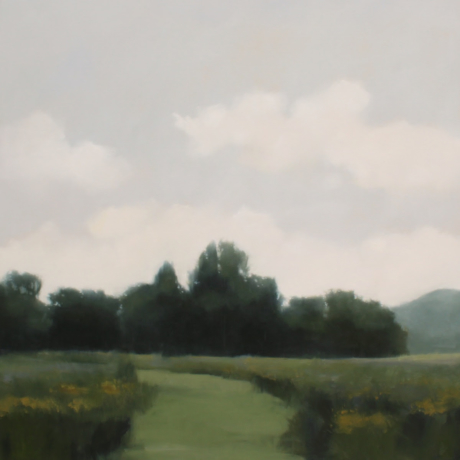 At the beginning of 2020, I had the intention of working on a series of paintings based on an anticipated trip west. Having just returned from my first time in New Mexico, painting the land formations around the home of Georgia O’Keeffe, my sketchbooks and mind were filled with the possibilities of new terrain, unfamiliar forms and color. That first trip had felt like a cautious introduction, and I was eager to return in spring.

These plans crumbled in March, as fIrst the Nashville tornado, then the pandemic, shattered any sense of routine life. Travel became an impossibility as I took on the new role of virtual school supervisor at home and struggled to adapt to the increased family needs brought on by the isolation of the pandemic. Since my studio is at home, I was grateful to be able to continue working, first making intimate sketches in the garden, and then carefully venturing out to more familiar open spaces and returning to the studio with those places in mind.

With so many people staying close to home and seeking safer options for gathering and exercising, the parks most familiar to me buzzed with a new energy. At first I felt a mix of disorientation and delight to see so many people appreciating our public open spaces, though early on it was unclear how close we should get to each other, how safe it was to be together even outdoors. Exploring local rivers and lakes on the kayak became an even more comforting option, offering uncrowded expanses and moments of quiet in an otherwise tense year.

These natural spaces became even more essential as the year unfolded; we celebrated Thanksgiving with extended family with a masked hike instead of sharing a meal, and we stayed connected with school friends by paddling at the lake or relaxing on spaced-apart blankets at a city park. The parks and rivers also provided space for solitude and reflection when the suddenly active home lacked peace and quiet.

The value of these places cannot be measured, something that many have come to realize on a deeper level this year. We learn that our bodies and spirits are inherently connected with the plants, animals, soil, air, and seasons surrounding us. As we are humbled to confront the reality that we are vulnerable to a tiny novel virus, we go out into the woods, fields, and water to remember that we are not separate from them.

These paintings are drawn from moments during this pandemic year, when being in a natural space brought restoration, connection, grief, comfort. They are from varied experiences: a solo kayak outing, a family bike ride interrupted by a storm rolling in, passing by a field at dusk on the way to gathering a bee swarm from a friend’s backyard. They are an invitation to reflect on our place in the natural world and our responsibility to honor our role in it.