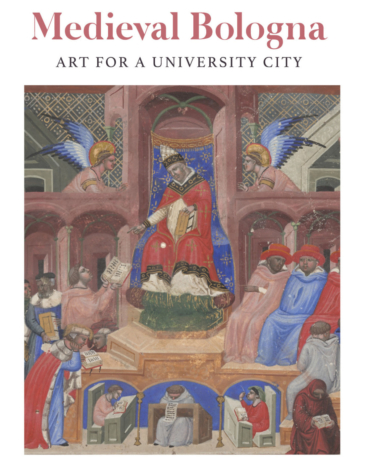 This is the first museum exhibition in the United States to focus on medieval art made in the northern Italian city of Bologna. Home to the oldest university in Europe, Bologna fostered a unique artistic culture at the end of the Middle Ages. With its large population of sophisticated readers, the city became the preeminent center of manuscript production south of the Alps, and it helped bring about a revolution in the medieval book trade. Manuscripts circulated in a thriving market of scribes, illuminators, booksellers, and customers operating mostly outside traditional monastic scriptoria. The university initially specialized in law, and many law books were illuminated in Bologna with brightly colored scenes. University professors enjoyed high social status and were buried in impressive stone tombs carved with classroom scenes.

The nearly seventy objects in the exhibition span from the mid-1200s to 1400, from the first great flowering of manuscript illumination in Bologna to the beginnings of the construction and decoration of the ambitious Basilica of San Petronio in the city’s Piazza Maggiore. Paintings and sculptures as well as manuscripts will be on view. Lenders include the J. Paul Getty Museum, The Metropolitan Museum of Art, The Morgan Library & Museum, and the National Gallery of Art.

The exhibition was made possible in part by NEA Art Works, the Anne and Joe Russell Family, the Samuel H. Kress Foundation, the Robert Lehman Foundation, and the Frist’s Picasso Circle members.

The exhibition catalogue is published with the assistance of The Gladys Krieble Delmas Foundation and Furthermore: a program of the J. M. Kaplan Fund, with additional support from the Samuel H. Kress Foundation and NEA Art Works.