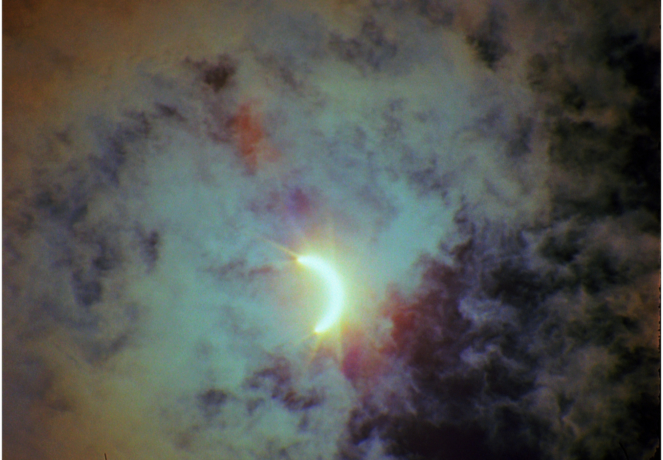 Seed Space presents Polly, a solo exhibition by artist Kevin Jerome Everson featuring two single channel films - one color, one black and white - filmed during the solar eclipse in Saluda, North Carolina on August 21, 2017.  Polly is named for Everson’s paternal grandmother, Bertha Everson, who passed away on August 20, 2017, one day prior to the eclipse.

Kevin Jerome Everson (b.1965) was born and raised in Mansfield, Ohio. He has a MFA from Ohio University and a BFA from the University of Akron. He is Professor of Art at the University of Virginia, Charlottesville. Everson was awarded the 2012 Alpert Award for Film/Video; his films has been the subject of mid-career retrospectives and solo exhibitions at the Harvard Film Archive (Feb. 2018); Tate Modern, London, UK (Fall 2017); Modern and Contemporary Art Museum, Seoul, Korea (Feb. 2017); Viennale (2014); Visions du Reel, Nyon, Switzerland (2012), The Whitney Museum of American Art, NY (2011) and Centre Pompidou, Paris in 2009. His work has been featured at the 2008, 2012, and 2017 Whitney Biennials and the 2013 Sharjah Biennial. He is co-curator, with critic Greg DeCuir Jr. of the 2018 Flaherty Film Seminar.

From April-September 2011, a solo exhibition of 17 short form works, More Than That: Films of Kevin Jerome Everson, was featured at the Whitney Museum of American Art. The feature film Quality Control (2011) was included in the 2012 Whitney Biennial and the short Emergency Needs (2007) in the 2008 Whitney Biennial.