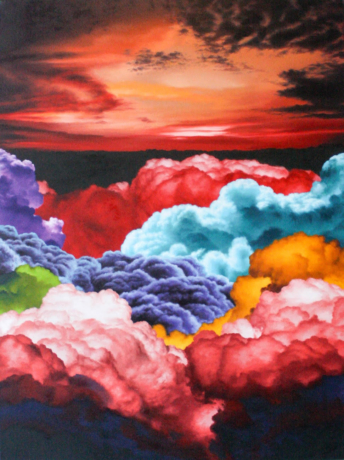 Julian Rogers is a dexterous oil painter who uses layers and light to manipulate how the eye sees. He exhibited his first solo show with Red Arrow, Alexander’s Dark Band, in June of 2019 and following that took an extensive break from painting, redirecting focus to his other passions. This July Rogers returns with Wave Upon Wave, an abstract study of vaporous clouds created in oil. Vibrant and brightly colored horizons reminiscent of fantastical otherly-worlds, this new body of work will both soothe and captivate.

This new group of paintings was made following a break from painting in which I lived in Thailand, China, and Mexico, drove for months camping in remote locations around the US, and experimented with different approaches to life and experienced cultures outside of the art centers of NYC and LA that I had become used to.

Clouds have already been painted by lots of people, which ended up being ideal as I realized what I was after was a kind of ego erasure. It's in this sense that this new series aligns with my earlier work: I get interested in something formally and develop a body of paintings and only during that process do I begin to understand why I am making them (as in the "third ear" relationship between analyst and analysand). This time there seemed to be a motivation to, again, get away from words. Clouds are just vapor after all. – Julian Rogers, Wave Upon Wave Exhibition Statement.

Julian Rogers (b. 1981) is a Nashville native who lived in New York for five years, painting for artists Jeff Koons and Bjarne Melgaard, and another five years in Los Angeles/San Diego where he received an MFA from UCSD and was represented by ACME Los Angeles. During this time, he showed his paintings both internationally (Spain, Japan, Mexico) as well as across the United States. His paintings have been collected around the globe, including the Museum of Contemporary Art, San Diego. He is currently living between Nashville, TN and Chiang Mai, Thailand and is represented by Red Arrow Gallery.