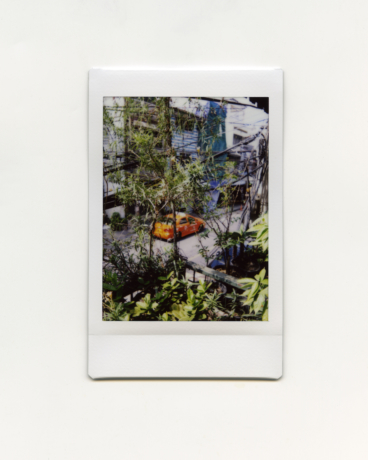 COOP Gallery is pleased to present The Space Between Two Rocks by Jonathan Johnson. The Space Between Two Rocks is poetic narrative featuring color photographic images made during, and in relationship to, the act of walking through urban and rural landscapes of Thailand and recent cyanotypes created during a month long residency on Lake Kultsjön in the Lappland region of Northern Sweden. In contrast to some contemporary uses of photography associated with digital culture, social media and self-documentation; this project embraces slowness through its production (walking, using color film, duration) and dissemination through a sequential form -- one of our final refuges for experiencing photographs in a personal, slow and physically interactive way.

As a mixed-race artist, he uses the act of walking as a way of situating and exploring the physical spaces that exist in both of his homes in Southeast Asia, Midwestern United States and elsewhere.  This method is a critique of productivism and meditates on how geography applies to fragmented space, identity and the construction of meaning.

Jonathan will be present at the opening reception on Saturday, September 8th.

More about the Artist:

COOP is a curatorial collective made up of artists, curators, thinkers and professors who are committed to expanding Nashville’s dialogue with contemporary art by presenting challenging new or under-represented artists/artworks to our community. COOP is committed to exhibiting art of diverse media and content, with a goal to provide an alternative venue for artists free from the constraints of the retail market. COOP seeks to initiate a discourse between Nashville and art scenes across the country by inviting artists to show, develop projects and interact with the Nashville community. Website: www.coopgallery.org