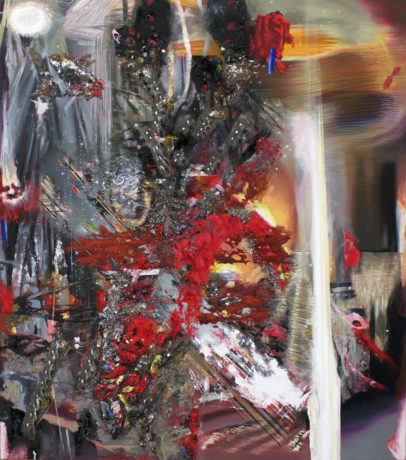 Tinney Contemporary is pleased to present Heterogeneity - New Work by James Perrin. An extension of Perrin's 2015 solo exhibition at Tinney, the paintings featured in Heterogeneity once again combine different imagery and ideas through dynamically layered compositions. The exhibition title speaks to this idea of diverse or dissimilar elements which are manifest through Perrin's purposeful combination and utilization of various concepts, frameworks, and strategies.

This group of paintings emphasizes the layering of imagery. Perrin derives compositions, new images, and visual suggestions out of the resulting intersection by blending and overlapping seemingly contradictory visual elements and intermingling them into a new and harmonious state. The focus becomes creating an arena where a resolution comes out of conflicting and divisive elements; order out of disorder. This type of painting embodies the reality of living in an environment that is constantly in a state of conflict, in a continual state of decay and renewal, entropy and regeneration. The current body of work incorporates visual elements derived from retail interiors, Caribbean beaches, fashion, CT scans, medical photographs, passages from paintings by Giotto, Masaccio, Enguerrand Quarton, and Fra Angelico, segments from his previous work, as well as photos from his daily life.

Perrin's work has been featured in solo and group exhibitions throughout the U.S., as well as in Venice, Italy. In conjunction with his solo show at Tinney Contemporary his work will be inlcuded in the group exhibition at the Frist Art Museum entitled Chaos and Awe: Painting for the 21st Century. In 2015, he was granted the prestigious Joan Mitchell award. Perrin lives and works in Nashville, TN.