J. TODD GREENE: IN THE FUTURE, EVERYTHING IS FREE 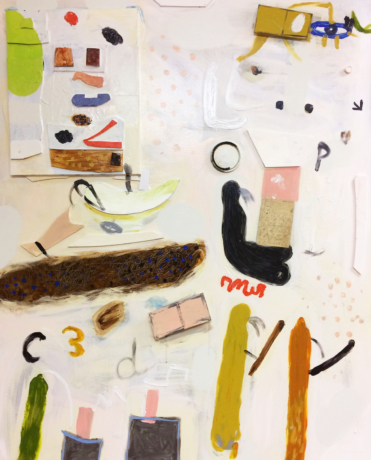 J. TODD GREENE: IN THE FUTURE, EVERYTHING IS FREE

Art venue Galerie Tangerine, a branch of Daigh Rick Landscape Architects, will host an exhibit of paintings and installation art by local artist J. Todd Greene entitled In the Future, Everything is Free from Jan. 11 to Mar. 23, 2018. The artist’s work explores the surge of political discontent billowing across our country. His introspective work speaks of paradox and spirituality, using acrylics, oils, mixed media, sculpture and construction.

In The Future, Everything Is Free features an eclectic mix of his infamous Paw Paw Sermon series, which blends effortlessly with his newer, more abstract work. Greene’s Paw Paw Sermon series stems from the pictographic cards his late grandfather invented to assist him in delivering his Sunday sermons. Although still painting pieces considered to be part of this series, Greene has followed his painting into more reflective work, which has led to an abundance of sculptures, installations, and even video compilations. Greene’s showcase is ultimately divided into two different character themes: the “Accidental Exorcist” and the “Harmony that Remained”. The “Accidental Exorcist” exposes the spirit of Donald Trump, while the “Harmony that Remained” mirrors the original spirit that has persisted in Nashville.

In this light, Greene has decided to showcase his work via a “pay what you want” principle. When asked about his reasoning behind this idea, he stated: “I've been strongly influenced by a book called The Gift and I'm finding a different way to get the work out there,” says Greene. “Some people have wanted the work, but the thing that's gotten in the way has been the price. I don't want that to get in the way anymore.”

After earning a BFA from the Savannah College of Art and Design in 1992, J. Todd Greene has worked as a full-time artist, illustrator, and art handler. His introspective work speaks of paradox and spirituality, and employs acrylics, oils, mixed media, sculpture, and constructions. He has produced numerous solo and group exhibitions and has multiple works in the Tennessee State Museum’s permanent collection. Greene’s work has appeared in national and local publications, including Time Magazine. Having taught drawing and painting at Watkins College of Art and Design and Ravenwood High School, he currently works with corporate and private clients and has a studio in Nashville, Tennessee.

Greene’s satire adds an element of subversion to Galerie Tangerine’s creative offerings, which evoke fresh art and promise a delicious flavor of events and exhibitions. Together, the art and space will bring forth new conversations about how we become inspired and what it means to carry that glow within ourselves.