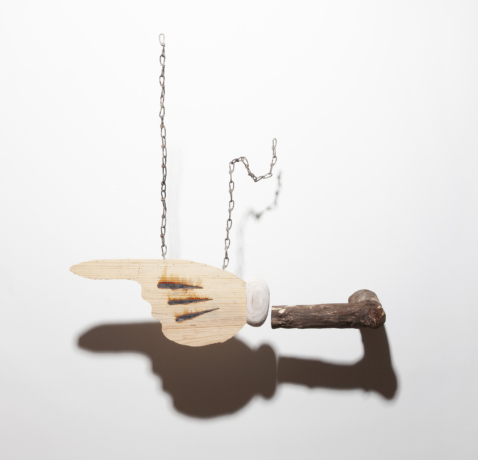 Myatt is widely recognized for his whimsical sculptural objects and monumental installations made from found materials. Through relationships and connections between genres and styles, notably surrealism, pop, and folk and outsider art, he develops a compelling visual language of scale and site, identity and place, and art and its history.

Late in 2021, Myatt showed BETTER THAN A STICK IN THE EYE at DLG Memphis. While the latter referenced the world in which we find ourselves, POINTING FINGERS AND FLINGING BRICKS describes the world, that is the people, we are: lacking responsibility and placing an abundance of blame. Myatt reminds us of the Biblical story of “The Mote and the Beam” - part of the Sermon on the Mount in which Christ addresses hypocrisy: remove the log from your own eye before you criticize the speck in your brother’s. Or, if you point one finger, three point back at you.

POINTING FINGERS AND FLINGING BRICKS continues Myatt’s practice of reclamation and fabrication while referencing cultural and social issues and riffing on art history. The two title pieces, Pointer and Flung Brick address those two sayings: Pointer finds its form in Walt Disney’s Mickey Mouse hand, but also recalls yesteryear’s directional shop signs. Supporting chains are disconnected and the arm, a raw tree branch, never connects to the hand. Nothing is as it appears. Flung Brick is a constructed image of a brick with motion lines made of colorful broom handles. Referencing George Herriman’s Krazy Kat cartoon characters Ignatz the Mouse throwing a book at Krazy Kat, Myatt makes it clear to the viewer that the brick “flying” in front of the wall is actually fixed in its position.

Other works in the show are far less literal to the title but encompass Myatt’s call for more compassion. References for Hero, a Myatt-height, box-like wooden structure, include Philip Guston and Robert Morris: Guston’s Martyr, a non-figurative interpretation of St. Sebastian in which arrows pierce a wooden framework, and Morris’ Untitled (Box for Standing). Myatt inserts handles of broken or retired garden tools through the box, filling the interior with tool heads and sending handles into the space surrounding the box. By leaving the handles up for grabs, Myatt’s piece serves as commentary on essential workers working with bad tools in the ongoing fight against Covid-19. Such as the Wind-Flower consists of five steel shelves that have been cut producing a progression of a hand, or glove, morphing into a flower – five fingers to five petals on five shelves. The flower is an anemone, or a wind-flower. In Greek mythology, this flower grows from a mixture of Adonis’ blood and Venus’ tears and is generally considered a sign of hope coming from the passing of death.

Greely Myatt was born in Mississippi, teaches in Memphis, and lives and works in West Memphis, AR. He received an MFA from the University of Mississippi and a BFA from Delta State University, Cleveland, MS, and is a long-time professor of art at The University of Memphis. He has exhibited in numerous solo and group exhibitions across the United States, Europe and Japan. In 2009, a twenty-year retrospective of his works was exhibited across Memphis in nine museum and gallery venues. His work is in numerous public and private collections.