MICHAEL RAY NOTT: GOOD MORNING AMERICA, HOW ARE YA! 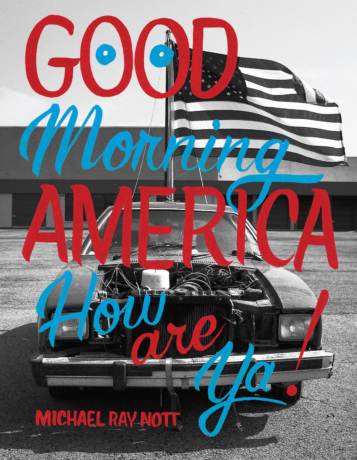 MICHAEL RAY NOTT: GOOD MORNING AMERICA, HOW ARE YA!

CONVERGE will host an opening reception for Good Morning America on Saturday, July 6, from 6:00 to 9:00 pm, at CONVERGE, located on the second floor of the SNAP (South Nashville Action People) Building at 1224 Martin Street, and at CONVERGE: EXTENSION 1, our satellite space located at 1260 Martin Street. We will also host a special artist reception with Michael Ray Nott and moderator Lily Clayton Hansen at CONVERGE on Thursday, July 18, from 6:00 to 8:00 pm, with an artist discussion starting at 6:30 pm. This reception will celebrate Michael’s book and conclude with a book signing. Lastly, CONVERGE will host a closing reception on Saturday, August 3, from 6:00 to 9:00 pm; the show will remain on view through August 23.

Both the opening and closing receptions are held in conjunction with Arts & Music at Wedgewood-Houston; all three events are free and open to the public. To schedule an appointment outside from the receptions, please contact Alysha.CONVERGE@gmail.com.

The following was written by author Lily C. Hansen about Good Morning America, How Are Ya!: Chance encounters, spontaneity, and humanity are at the core of documentary photographer Michael Ray Nott’s new book, Good Morning America, How Are Ya! Shot entirely in public spaces, the book studies how the people of Nashville reacted to the political madness of the last four years. The photos, contextualized by Nott’s fascination with voyeurism and exhibitionism, encourage viewers to come to their own conclusions about our current political climate...

...At the University of Texas [Nott] was first exposed to photography...After college, Nott worked as a magazine art director in Austin and Houston, Texas. In 1987...he and his wife moved to Nashville where he...became partner at several custom publishing companies. Six years ago, Nott left the corporate world and decided to follow his desire to raise public awareness around social issues through photography. After he was hired as art director at The Contributor...Nott achieved his dream of receiving a press pass that afforded him...access to any event. He took his first photos for Good Morning America, How Are Ya! at the Trump rally in December 2015 and over the next four years, amassed a collection to draw upon for his book.

Initiated by Eric Malo and Alysha Irisari Malo, CONVERGE creates socially conscious, project- based cultural programming that has a positive impact. CONVERGE is a fiscally sponsored project of the Arts & Business Council of Greater Nashville, a nonprofit organization.