JASON CRAIGHEAD: FROM RIVER TO OCEAN 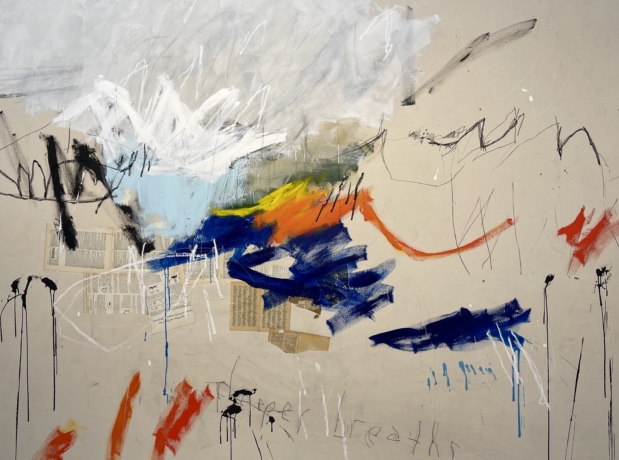 JASON CRAIGHEAD: FROM RIVER TO OCEAN

Tinney Contemporary is proud to present From River to Ocean, a new body of abstract paintings by Jason Craighead.

Craighead’s bold and colorful gestural markings abbreviate swaths of exposed canvas and soft washes of color. Gentle, wide brushstrokes and negative space are interrupted by frenetic drips and jagged scrawls, which seem to flow into words and phrases only just-legible, as if hovering at the edge of the unconscious; half-remembered, out-of-focus.

The written word manifests in two forms in Craighead’s paintings. Scribbled mantras, which seem to proceed from the gestural markings, are at one with the visual-language of the artist’s brushstrokes. The words emanate from the mark-making process itself, as if the paintings are a meditative search for language. Yet, this search is always in tension with the pages of type interpolated onto the canvas. Structural meaning is fractured; deconstructed through these pages, which appear to be torn from old dictionaries.

These large-scale paintings delve into the depths of human feeling in a way that words cannot. Moreover, they seem to point to the cracks in words themselves. Text becomes a broken vessel, often incapable of holding the fullness of waking life, much less of expressing that experience to another. Instead, the poetic ambiguity of color and the energetic expression of gestural marks allow for a shared experience of meaning-making, creating a mutual space of communion between artist and viewer.

What results is an undulating current–here a gentle tug, there a violent rush–a continual movement which lives and breathes and proceeds forward into a larger whole, like rivers running into the ocean, a dissolution of the singular into the collective.