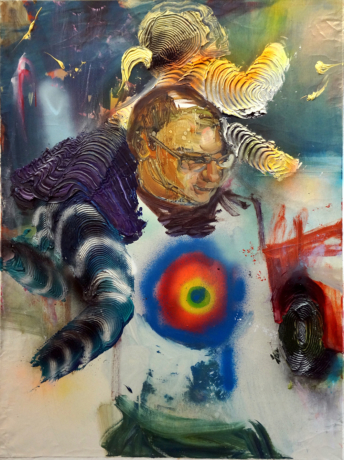 Shadyville is a place where atmosphere, light, and shadow obscure the landscape, and faces are always hidden. It is a place of waiting, of gathering, and of things concealed. Though the work of Knoxville-based studio mates Eleanor Aldrich and Heather Hartman is, on the surface, very different, both share a sense of mystery and an interest in material transformation.

Aldrich builds up thick oil paint in which quick cross-contour marks work against traditional assumptions of the medium. Hartman, on the other hand, creates soft luminous surfaces with minimal evidence of mark making. The figures in Aldrich’s work form unclear relationships with the viewer, as their backs are turned, and faces are obscured. The subjects seem unaware of the viewer’s presence, flipping the traditional figurative relationship where the viewer is confronted by the conscious presence of the subject. The woven chair backs also allude to the grid; lending the paintings a more formal sensibility.

Hartman’s work similarly addresses a sense of ambiguity and formal decision-making. The viewer is confronted with common distortions of light, shadow, and atmosphere making the familiar abstracted and unfamiliar. Thus - for a fleeting moment - the mundane is transformed into the sublime. In Hartman’s paintings, the arrangement of these elements alludes to an ever-shifting landscape; a place where things slip in and out of focus and viewers cannot always locate themselves. The sense of shifting space and meaning in the work of these two artists, is particularly relevant in an age where our relationship to the physical is increasingly tenuous. Welcome to Shadyville.