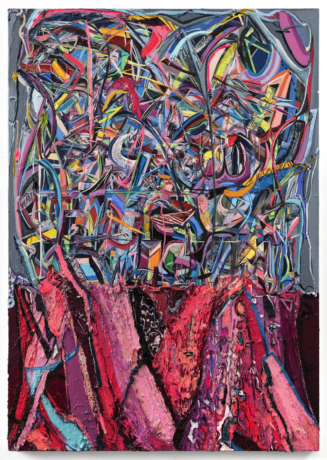 On March 19, join us inside the Fine Arts Gallery for an exhibition of oil paintings by Ali Smith, along with the debut performance of a composition by Michael Alec Rose, made specifically with Smith’s large-scale canvases in mind. A quartet of distinguished faculty of the Blair School of Music will be performing together, amidst paintings by Ali Smith: Molly Barth (flute), Stephen Miahky (violin), Jeremy Wilson (trombone), and Felix Wang (cello). John Warren, film artist and lecturer in the Department of Art at Vanderbilt, will produce a video of the in situ performance, to be experienced during the run of the exhibition.

Visual artists and composers have long engaged in dynamic dialogues. The exchange of musical ideas and visual aesthetics were famously vibrant in the collaborations between Claude Monet and Claude Debussy, Wassily Kandinsky and Arnold Schoenberg and other artists of the nineteenth and twentieth centuries. The artist Ali Smith and composer Michael Alec Rose continue this conversation into a new millennium, allowing the Vanderbilt community and wider Nashville public a window into their process. We look forward to the opportunity to see and hear how one art form can give sustained attention to another, while attempting to translate not only the specific features, but also the essence of an artwork, from the language of one medium to another.

Michael Alec Rose is associate professor of Composition at Vanderbilt’s Blair School of Music, and a composer of symphonic, chamber, piano, vocal, wind ensemble, ballet and theater music. From 2005 to 2016, he co-directed an international exchange program between Vanderbilt University and the Royal Academy of Music in London. Rose has composed eight string quartets, all premiered by distinguished ensembles, at venues including the Library of Congress, Tate St. Ives (Cornwall, England) and the Blanton Museum of Art (Austin, Texas).

Ali Smith paints vibrant, abstract compositions in oil on canvas whose forms suggest complex organic structures and imaginary landscapes. Her brightly colored and heavily textured networks of lines and forms constitute a personal language of motifs and shapes. Smith received her MFA from California State University, Long Beach (CA), and has since had solo exhibitions at Mindy Solomon Gallery in Miami and Mark Moore Fine Art in Los Angeles. She has been included in numerous group shows, including those at the Laguna Art Museum and Riverside Museum in California. The artist lives and works in Long Beach, California.

John Warren is a film and video artist, a lecturer in the Department of Art at Vanderbilt University and the artistic director of the psychedelic-themed Far Out Film Fest in Nashville. He earned a BFA from Emerson College in Boston and an MFA from the California Institute of the Arts. Warren makes films and installations that explore the lyrical and subjective frontiers of experimental, documentary and narrative. His cinematic work has exhibited internationally in a wide range of museums, festivals, micro-cinemas, gallery exhibitions and non-traditional venues.