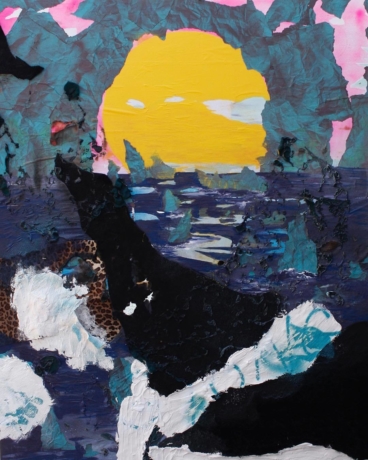 Red Arrow Gallery announces The Silent World, with painter Daniel Holland, opening on May 12, 2018 from 6-9pm.

Red Arrow Gallery is pleased to present The Silent World, it’s fourth solo exhibition with Daniel Holland. An all new selection of his work between 2017-2018 will be on view. Holland’s mixed-media, abstract landscape driven paintings and collage works, are textured and thought-provoking. In The Silent World, Holland portrays an underwater world that he has expanded upon, identifying not only silences that occur in nature, but also those that occur in a person’s day to day life.

In this series Holland is trying to capture the silent moments in life describing the works as:

“Like waiting underground at an empty train stop at 3 am, or holding one’s breath underwater at the public pool, swimming softly through coral, indifferent to human excitement. Quick escapes, like leaving your friends behind on the beach and hiding beneath a pier to smoke, alone and safe from the wind. Standing quietly in the sand, contemplating the graffiti and the garbage. I've always looked forward to these moments alone, when I can daydream wildly.” - Daniel Holland, 2018

Daniel Holland (b. 1984, South Carolina, United States) attended Watkins College of Art and Design. He has shown in multiple exhibitions around Tennessee, such as OZ Arts Nashville and The Red Arrow Gallery. Holland has been featured in the Nashville Arts Magazine as well as the Nashville Scene. Specializing in large scale abstract landscapes he captivates the viewer through his playfulness in color and simplistic design. Holland currently lives and works in Asheville, NC.