CREATING THE AMERICAN WEST IN ART 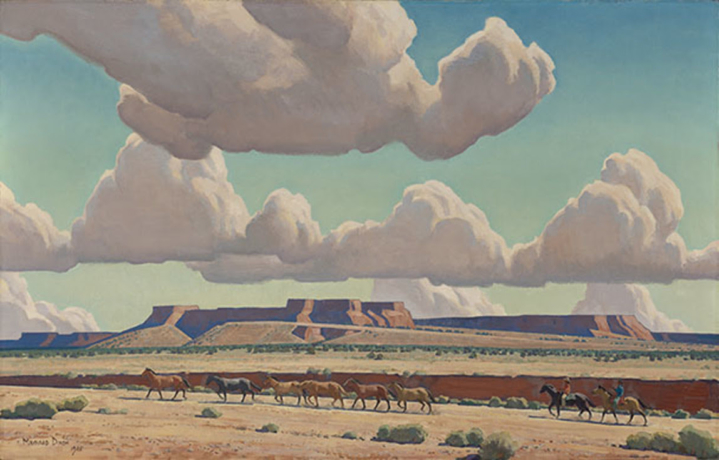 CREATING THE AMERICAN WEST IN ART

The Frist Art Museum presents Creating the American West in Art, an exhibition of nearly 80 paintings and sculptures ranging in date from 1822 to 1946 and made by such notable artists as Albert Bierstadt, Thomas Moran, Frederic Remington, Charles Marion Russell, E. Irving Couse, Robert Henri, John Sloan, and Maynard Dixon. Drawn from the Petrie Institute of Western American Art at the Denver Art Museum, the exhibition will be on view in the Frist Art Museum’s Upper-Level Galleries from March 5 through June 27, 2021.

For many, the words “American West” have long conjured a concept as much as a location. Throughout the 19th and 20th centuries, depictions of the people, landscapes, and wildlife of the West fostered a sense of American identity that was rooted in a pioneering spirit of adventure and opportunity. This exhibition offers the opportunity to explore the nuances of a complex American West, including its often-challenging history—especially regarding the forced displacement of Native Americans—and its vibrant and diverse natural beauty.

“As our vision is to use art to encourage our guests to see the world in new ways, we often collaborate with members of various communities to assist in broadening views of the subject matter,” says Frist Art Museum curator Katie Delmez. In preparation for the fall 2019 presentation of Hearts of Our People: Native Women Artists, the Frist worked with members of our local Indigenous community to form an advisory group. “Because Indigenous figures and culture are represented in works of art made by Euro-American artists in Creating the American West in Art, we invited several of our advisers to offer their perspectives on what is depicted,” says Delmez. “In foregrounding Indigenous voices, we hope our guests will consider a more inclusive narrative of the works in this exhibition.”

Most of the artists represented in this exhibition spent years studying in Europe—predominantly Italy, Germany, and France. They returned to the United States, however, determined to distinguish themselves through uniquely American subjects. “Depictions of the West made in an array of styles over the course of 150 plus years crystallized key components of American history and mythology, including the concept of manifest destiny and American exceptionalism,” says Delmez.