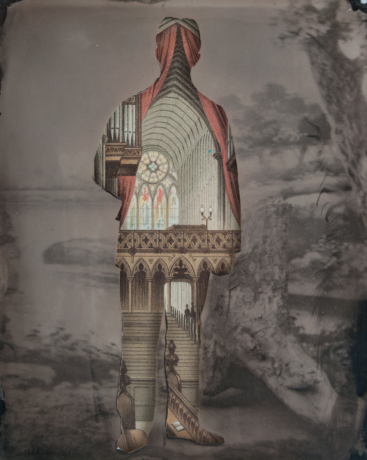 Cumberland Gallery is excited to present Collaborations, a group show featuring ten artists duos, who came together and created new work for this occasion, along with a series by long time collaborators Billy Renkl and Greg Sand. On collaborating, Renkl and Sand say:

“In our own culture, at least, the practice of making art is often an exclusively self-referential activity. The popular model is for the artist to disappear into their attic of anguish, emerging eventually with a personal, insular, self-referential triumph. Or, often, not.”

Indeed, artists do not work in a vacuum. On the contrary, art is a direct reflection of what exists in a society and is therefore often also self-referential. Hence, it is no surprise that collaborations between artists are documented throughout history and are still relevant in many ways. The practice of collaborating can for one be freeing and eye-opening, for it functions as a vehicle to break away from the personal established vocabulary. It is also a sociable happening in which artists escape work in solitude and openly share concerns. For others, collaboration is confrontation when work is closely scrutinized and manipulated by the co-collaborator. Or it can be a practicality, especially for young emerging artists, to share space, materials and to feed off of each other ideas.

Either way, collaborations are more than the accumulation of forces. When two artists work together, directing and combining their unique sets of skills, knowledge, talent and experience, towards a common goal - an original idea is created. It is the Aristotelian principle of ‘The whole is more than the sum of its parts’ or the concept of ‘Synergy’, etymologically meaning ‘working together’. When viewing collaborative art there is the immediate temptation to separate the individual artist hand and to trace back the original idea to a single source. While this context is a key introduction to engage viewers, each artist is equally indispensable to the process. The true value of these creations lays in their unique collection of ideas and the concept of two distinct voices merging into one unprecedented formal language.

Furthermore, a selection of collaborative work by Billy Renkl and Greg Sand will be showcased in the lower gallery. This duo, both based in Clarksville and associated with Austin Peay State University, have been collaborating since 2013. Even though Renkl (collage artist) and Sand (photographer) have different approaches, both centralize the found image in their art-making. Sand is known for the repurposing of cyanotypes and antique photographs, exploring the metaphysical issues of existence, time and death while observing the inherent properties of the medium. Similar concepts are found within the work of Billy Renkl. Inspired by the revolutionary ideas of the early twentieth century, Renkl creates collages with found paper, and enhances them with mark making and various printing techniques. This combination of collage and manipulated found photographs, to which one artist adds and the other deducts, resulted in subtle evocative imagery.