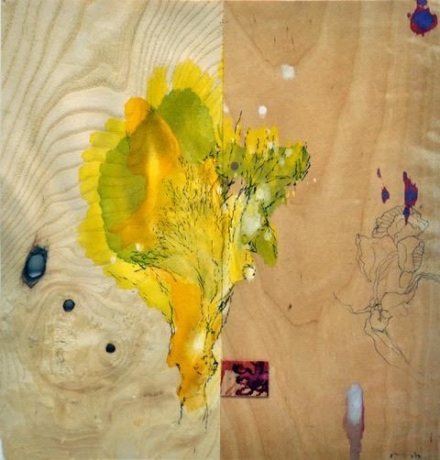 Since its inception in 1980, Cumberland Gallery has shown and handled the work of California artist Bob Nugent. For his seventh solo show here (excluding numerous group exhibits), Nugent presents a diverse breadth of new paintings and works on paper and veneer. Ecos de Inhotim is a continuation of the artist’s impressions of Brazil and the Amazon River Basin, an ecosystem which he has explored through mixed media for over thirty years.

Bob Nugent’s studio work and research draw inspiration from his ventures through the rainforest, as he visits the Amazon region of Brazil two to three times a year. The river he articulates, “ is an apt metaphor for the act of churning up remembered objects and sights, gathered while traveling along its rough course.” In his statement, he describes the flow of the river as a force which picks up and carries elements with it, swallows them, and resurfaces them. This erosion is delicately expressed within the layered lines, rich, warm tones, and saturated hues of Bob Nugent’s compositions.

A skilled draftsman in watercolor, oils, ink, pencil, printmaking and other media, Nugent spans a multitude of textures and surfaces inspired by the wealth of living species in the Amazon jungle. Identifiable forms evoke plants, insects, mushrooms, anthills and other organisms found in the lush environment. The artist describes his palette as being “subdued” or shaded, alluding to the thick, deep foliage that barricades both sides of the river. Rather than depicting scenes in the jungle, Nugent expresses and connects the ambiguity of his drawn forms to the natural mystery and remoteness of Amazonian life. As a frequent visitor, Bob Nugent maintains relationships with many of the Brazilian natives of Amazonia, allowing him to better understand the land and landscape of the region as well as current issues facing the inhabitants.