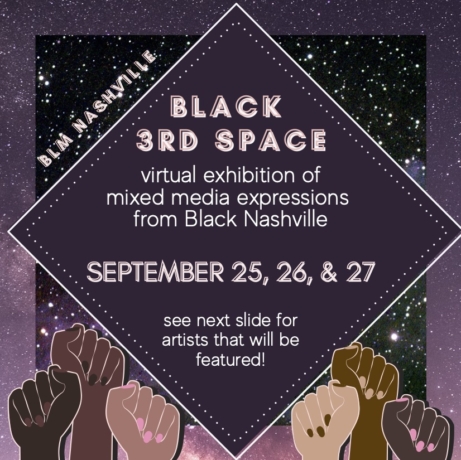 In sociology, space is often described in different layers or levels. In the Marxist & Social Constructivist models of space there is a triad of: physical/perceived [first] space, which is mappable or measurable; mental/conceived [second] space, which consists of our ideas and thoughts; and then the social/lived [third] space. The third space is significant because it is the product of a society living with ideals of colonization, oppression, and marginalization. Playing on this tri-level concept of space, Ray Oldenburg coined the term Third Place, which he described as politically significant in that they are often the venues for non-government movement work (like our own) because of their emphasis on localness, accessibility, and social leveling which allow people to gather and share new ideas freely. However, third places have been on the decline for some time in this country, and most of the best examples have histories of anti-Black racism.

Black Lives Matter (BLM) Nashville, and our larger Movement for Black Lives (M4BL), are examples of the movement work that would excel in third places. We are dedicated to working towards the collective liberation of all Black people through grassroots, collaborative actions, which center the needs and voices of our most marginalized community members. Almost all that we do centers on space - how it is defined for people, ideas, and material resources. And that space is inherently political; it is taken, used, and controlled in a way that has upheld the supremacist ideals of colonization, oppression, and marginalization under which Black people are subjugated.

Through our actions and guiding principles we seek to protect the physical [first] spaces and resources, and uplift the psychological [second] space of Black Nashville; fighting for community autonomy, housing and land security, inclusive representations of disability, gender, and sexuality, and celebrating Black joy and life. And it is through the introduction of this new art program through our social media platform, that we hope to intentionally expand into creating a new third space for Black Nashville: a Black 3rd Space.

“[Third Space] disrupts, disorders and begins to reconstitute the conventional binary opposition (between real and imagined) into an-Other that is more than just...the sum of the parts...This results in a third space as shared, social space: collective space, transcending the first and second spaces as a place of ‘OTHER,’ a place of open possibilities, a place of NEW POTENTIAL for going beyond the physical and the representational...It is outside of time and space, not limited to those rules and limits. It is transcendent, it is connected, it is spatial in terms of a sense of active play that takes place in a space without borders like worm holes, instant trajectories that defy distance and geography”
- Edward Soja, Thirdspace: Journeys to Los Angeles and Other Real-and-Imagined Places

In Soja’s description above we find both our inspiration for envisioning a creation of a new space of expression and a representation of our vision for how we see a radical future of greater possibilities; one that is inspired by and preserving of what Sonya Renee Taylor refers to as, the technology of Blackness.

It is in this vein that we have created our new Black 3rd Space program: a virtual exhibition of expressions by local Black artists, makers, and creators. A platform for sharing our collective experiences, transformative ideas, and art that has the potential to transcend the limitations of our first and second spaces.