AUSTIN PRATT: NOT THIS, NOT THIS 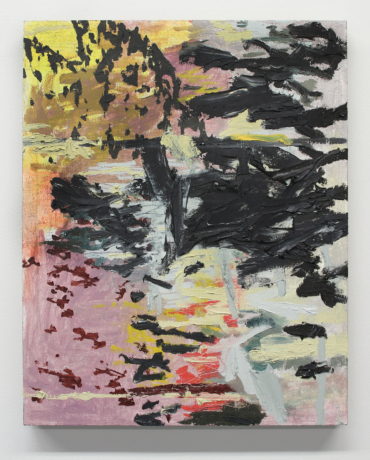 AUSTIN PRATT: NOT THIS, NOT THIS

"In the past, I have been interested in the metaphysical and philosophic idea of immanence, whereby meaning or divinity permeates the mundane and material world. The logical extension of this thinking led me down to pick at the scab of abjection. If matter is sacred, it will occur in the lowest forms too; toe nails, in bodily fluids, in trailer parks, but yet also in art materiality; not elevating but underlining debased art materials—black denim, wood, the indexical mark over the pictorial image. This search resonated out of dissatisfaction with the dominant current mythology which is materialist, yet devoid of significance.

In some of this work, I thought to explore the transcendental, as the alternative of immanence, often seen as dual and inseparable truths. Not as a rejection, but to further promote and advance ambivalence, paradox, and non-dualism. In this way I wanted to apply “negative theology”, another philosophic practice that seeks to approach the sacred only by negating where it is not.

Culling visual information from sources such as the landscape of Northern Nevada where I am from combined with the graphic utility of punk flyers, and marks in a painterly organic abstraction evoking rock formations, boundary markers, building footprints, fossil records, species distribution patterns, but not. I consider pattern recognition and degeneration, musicality, initiation, perception, legibility, and distance as generative and descriptive terms. Not landscape, not not landscape. Not text, not not text. Not image, not not image. Both/And. Neither/Nor. Not this, not this. How to articulate the ethos of DIY with the lessons of the psychedelic experience. Amateurism, immediacy, permeability. Trickster shit. Two snakes of the caduceus in the left hand of Hermes, the messenger of the gods, protector of crossroads, merchants, travelers, gamblers, liars, and thieves. Punk flyers for desert lakes. Book covers for radical presence. Earth propaganda. Advocating devil’s advocacy."