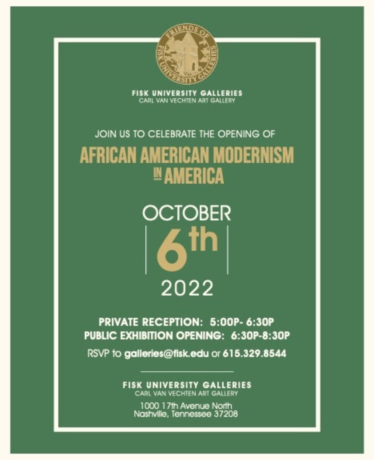 African Modernism in America, 1947–1967 is the first major traveling exhibition to examine the complex connections between modern African artists and American patrons, artists, and cultural organizations amid the interlocking histories of civil rights, decolonization, and the Cold War. During these years, institutions such as the Harmon Foundation, the Museum of Modern Art, New York, and Historically Black Colleges and Universities (HBCUs) collected and exhibited works by many of the most important African artists of the mid-twentieth century, including Ben Enwonwu (Nigeria), Gerard Sekoto (South Africa), Ibrahim El-Salahi (Sudan), and Skunder Boghossian (Ethiopia). This exhibition is drawn primarily from Fisk University’s collection of gifts from the Harmon Foundation. It features more than seventy artworks by fifty artists that exemplify the relationships between the new art that emerged in Africa during the 1950s and 1960s and American art and cultural politics. The show reveals a transcontinental network of artists, curators, and scholars that challenged assumptions about African art in the United States, and encouraged American engagement with African artists as contemporaries.

African Modernism in America will be presented in four sections. The first, “Art from Africa of Our Time: The Modern African Artist” will foreground the places and people who supported the display and promotion of modern African artists in the United States. The section begins with a selected restaging of the 1961 Harmon Foundation exhibition and will expand to consider a variety of institutions—including artist Merton Simpson’s New York gallery, the Museum of Modern Art, and historically black colleges and universities (HBCUs)—where then-contemporary art from Africa was exhibited in the United States. These venues were influential, and their presentation of African art impacted art collecting in America.

“Mapping Modernist Networks in Africa,” the second section of the exhibition, will highlight the continent-wide networks instrumental in the development of these new, forward-thinking spaces for the display and discussion of postcolonial modern art. This section will stress the collaborations these art spaces and workshops fostered across the continent and with other international Cold War-era cultural organizations.

The third section of the exhibition, “African Modernists in America,” will highlight the establishment of meaningful connections between African and African American artists in the United States. El-Salahi, Boghossian, Ntiro, Tessema, Mohammad Khalil (Sudan), and other African artists traveled to the United States to study in the 1960s, often with Cold War-era sponsorship. Artist and art historian David Driskell, Professor of Art and Chairman of the Department of Art at Fisk University from 1966 to 1977, made numerous trips to Africa, and their influence is clearly visible in his art. Inspired by his encounters on the African continent, Driskell invited artists including Peter Clarke (South Africa) and Ladi Kwali (Nigeria) to Fisk during his tenure there.

The exhibition concludes with “The Politics of Selection,” a new commission of the same name by Lagos-based sculptor Ndidi Dike that will interrogate the collecting histories presented in the exhibition, including those of the Harmon Foundation. The Foundation’s progressive commitment to an expansive understanding of modernism was shaped under the direction of Mary Beattie Brady and Evelyn S. Brown, two white American women. After researching the archives of the Harmon Foundation and Fisk University Special Collections, Dike’s work has resulted in an immersive multimedia installation that examines the multiplicity of viewpoints, biases, prejudices, allegiances, and omissions found in the archives.