THE DEATH OF FEAR 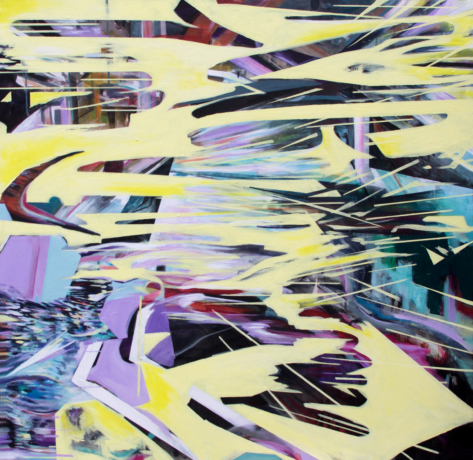 THE DEATH OF FEAR

The Death of Fear will feature works by Sisavanh Phouthavong Houghton in the main gallery and works by Nelson Gutierrez in the gallery foyer.

The Death of Fear explores President Franklin D. Roosevelt’s concept of “Freedom from Fear” from the perspective of two artists who immigrated to the United States. Through methods of isolation, abstraction, and collage, each artist explores states of flux, the disconnection from destructive places or politics, and the fearless pursuit for a better life. The exhibition is in collaboration with For Freedoms and its 50 State Initiative, a platform for greater participation in the arts and in civil society that produces exhibitions, installations, public programs, and billboard campaigns to advocate for inclusive civic participation.

Sisavanh Phouthavong Houghton is an Associate Professor of Painting at Middle Tennessee State University. A native of Laos who came to the United States with her parents as a small child, she earned her BFA from the University of Kansas and her MFA from Southern Illinois University of Carbondale. Her current body of work is inspired by the mission statement of the non-profit organization, Legacies of War: "is to raise awareness about the history of the Vietnam War-era bombing in Laos and advocate for the clearance of unexploded bombs.” As a refugee/immigrant, she views the process of connecting and disconnecting with a place or community as abstracted ideas of migration. Her collage and painting process is unpredictable, and is an ongoing dialogue about assimilating and relocating into another culture and space. Teetering between realism and abstraction, often achieving kaleidoscopic effects, she employs multiple viewpoints, rhythmic fragmentation, and strong color contrast to fuse both contemporary and historical landscape elements into one. She continues to give back to the refugee community by partnering with the Frist Art Museum through its Educator for Community Engagement program, the Oasis Center, and the Center for Refugees and Immigrants of Tennessee.

Nelson Gutierrez was born in Bogota, Colombia, where he earned his BA at the Universidad de Bogotá Jorge Tadeo Lozano before earning his MFA at the Chelsea College of Art and Design in London. Gutierrez currently lives and works in Memphis. Through art, he looks to better understand societal conflict and its implications psychologically and socially, addressing issues of longing, fear, grief, and vanity through the juxtaposition of materials and media such as charcoal, ink, wood, metal, blood, wax, water, glass, light, and photography. His Death of Fear series depicts individuals on both sides of protest—activist and suppressor—isolated in fields of blank white. Devoid of any identifiable setting, each figure has been extracted from their original context and drawn from archival photographs documenting actual uprisings, demonstrations, rallies, and riots around the world. His second series, Mandalas, takes the figure drawings a step further, using the expressive solitary forms to build contemporary meditative structures. These radial formations are hand drawn, repetitiously illustrating the same figure around a central point, while collectively illustrating observable behavior patterns in instances of civil disobedience.