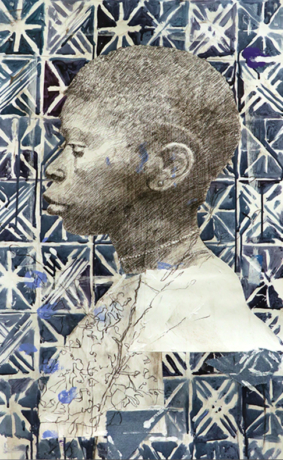 For over a decade, Terry Lynn collaborated with his identical twin brother as TWIN, employing figurative painting with spirited gestures and textural layers of imagery to narrate his family’s history in the South. More recently, he has developed his individual practice with a deeper exploration of abstraction, expanded use of media, and the integration of provocative political and cultural commentary. Still inspired by his family’s history and traditions, but influenced by current social issues and his own personal revelations, he bridges the past with the present through a dynamic mix of materials and forms. He activates nostalgic, rural landscapes as well as portraits and gathering scenes with loose, broad, abstracted gestures - some markings reminiscent of graffiti. He combines paint, photographs, and referential details like cotton and ticking fabric upon earthy undertones, energizing each composition with jewel-toned, some almost neon, highly-saturated brushstrokes. His works possess a timeless, powerful spiritual presence, telling stories which dissolve the past into the present and memory with reality.