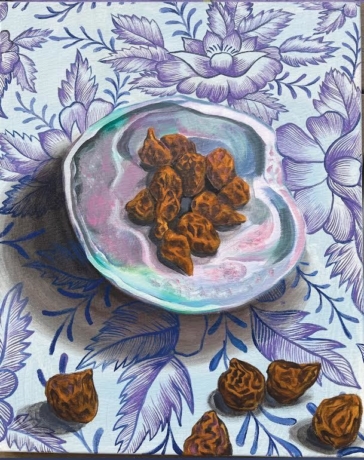 Williams-Ng, whose married name is a combination of her own and her husband’s, is a graduate of U of M’s Fine Art program. Although she was born, raised and educated in Memphis, she has been living in other cities for 26 years and has only just returned to sink roots in her hometown again.

“I have been researching, writing, and drawing images that relate to place and identity for all of this time,” says the artist. “Even in Milwaukee, which I called home for over a decade, I always identified as a displaced Southerner.”

These new paintings are all part of a series which was created to illustrate an oracular card deck of the artist’s creation. The Southern Gothic Oracle is a deck of 45 illustrated cards that can be used like a Tarot deck, but it’s entirely original and based on the folkways of the South. Each card has a painted illustration, and this show is an exhibition of the original acrylics.

Each painting features an animal, place or object from our region, and the guidebook written for the card deck provides possible interpretations for those looking to read their fortunes in each image. There is a Mason Jar painting, for example, and according to the booklet it represents mentorship and protection. “Food canning is a practice that has been handed down in families for generations,” says the booklet. “Open yourself to lessons [that] will lead you to new paths of wisdom.”

There are many paintings that are specifically local references. “The Crystal Shrine Grotto is one that any Memphian would recognize,” says Williams-Ng. “There is also a Grove card, signifying sacred places in nature, but for people in the know it’s a Walnut Grove reference.” The scene itself is painted from a vista along the Shelby Farms Greenway. Memphians will also easily relate to objects like the Mojo Bag, the Instrument (Banjo), the Black-Eyed Peas, Kudzu, and the Crossroads, many of which carry cultural references to local history and music.

The paintings all point back to inspiration in the esoterica of Southern belief systems. Each painting has a meaningful reference to something in hoodoo, Ozark healing practices, Christianity or many of those at the same time, reflecting the complexity of cultural identity in our region.

Examples of the card deck will be on hand at the opening night of the exhibition on September 3, 2021. The artist will offer card readings for those in attendance who are interested in seeing the oracle cards in use. “I hope this paves the way for lots more projects like this,” says Williams-Ng. “I feel like so many of the old traditions are being lost, just as modern generations are taking a deeper interest in them. We need more people trying to preserve the old ways.”

The Southern Gothic Oracle exhibition opens from 6-8pm on September 3, 2021, and will be on display through October 3.