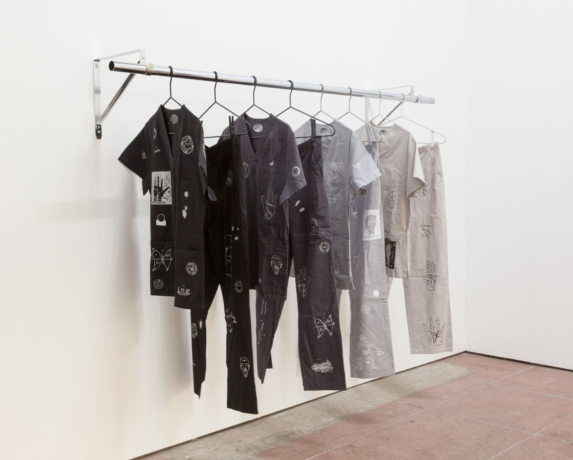 Sad men on bad afternoons explores notions of awakenings, of seeing true beauty on the most difficult days. It is a renewal or a heightened awareness of modest moments. The show considers a range of self-preservation techniques from a tropical sunset, physical adornment, to allowing yourself to venture into a new psychic space. Located in a glass box in a busy city park, the work is communal adjacent; sharing at a distance, attempting to connect, to escape, to find exactly what is needed just around that next corner.

Joseriberto Perez was born in Newark, New Jersey and has lived in Miami since the early 1990s. His abstract paintings and sculptures explore Western aesthetics, anthropology, and the role of painting in contemporary society. In 2014, Perez had a solo exhibition at GUCCIVUITTON!, Miami. His work has been featured in several group exhibitions in Miami, including David Castillo Gallery, Frederic Snitzer Gallery, and Butter Gallery, and is represented in the Margulies Collection. In 2007, Perez studied sculpture, painting, and printmaking at The School of The Art Institute of Chicago, where he completed his MFA in 2017.

Kandis Williams (b. 1985, Baltimore, MD) received her B.F.A. in 2008 from the Cooper Union School of Art, New York. Her recent exhibitions include solo shows at SADE, Los Angeles, and St. Charles Projects, Baltimore, and a performance and workshop at Human Resources, Los Angeles. Her work has also been exhibited at The Studio Museum in Harlem, New York; The Underground Museum, Los Angeles; Neu West and 68 Projects, Berlin; and The Breeder, Athens, among other spaces. Williams has an active curatorial and writing practice, and runs Cassandra Press with artist Taylor Doran. Williams lives between Los Angeles and Berlin.

Daniel Fuller is the curator at the Atlanta Contemporary. He has curated exhibitions at ice fishing shacks, a swap meet, the JumboTron of a hockey stadium, on public access television, and in several closets. A book of essays titled 'This is not here' will be published in 2017 by Publication Studio.